Bluesy riffs and heavy, psychedelic jams accompanied by smoking hot vocals kick off today's supernova fission explosion from Philadelphia's Ruby the Hatchet, a new band with an experienced sound, a sound that is huge and fuzzy, energetic and heartfelt, unrelenting and joyful. They are incredible and pleasurable and a sheer delight for the most discerning of fans of heavy, bluesy, stoner music. On their heels comes the southern fried sounds of The Great Khan, a solo effort from Gregg Buzzer of Buzzer fame, a band and an artist that have perfected their southern rock sound from the distant shores of Tel Aviv, Israel . . . yes, Israel, something you would never know by exclusively listening to their music alone. The Great Khan has assembled a collection of songs that are sure to satisfy that deep fried, extra sweet, scorching summer sun desire that all fans of the sounds of the south eternally pursue. 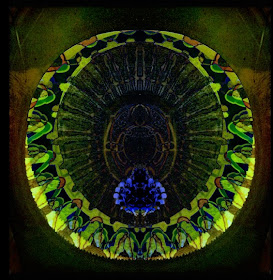 The tone is set right away on the opening track, "Taking Sides", where the opening riff leaves a trail of fuzz and delight in its wake and on its fast tempo way toward a catchy, guitar laden foray into a bluesy landscape.

One of my favorite songs on the album is track #3, "Can't Get Him Away". It starts out without too great a sense of urgency, the focal point being Jillian's powerful, forceful vocals as much as anything. Nearly halfway in the urgency kicks in, however, as Owen joins Jillian in a vocal sparring session that combines with guitar work that has suddenly found the boogie and is jamming with intensity and intent. This song is incredibly enjoyable as it hooks and jabs, bobs and weaves, ducks and slides its way through massive riffs, powerful vocals, and a frenetic tempo.

Ruby the Hatchet show off a bit of writing dexterity with both "Holy Father" and "Nowhere", supremely soulful tunes that are haunting and beautiful, both showcasing some beautiful guitar and drum combo work overwrought with muted, ethereal vocals that cut straight through to your inner core with their powerful, fervent sound.

The closer, "Good God Damn" is a rollicking good time, chock full of huge, fuzzy guitars, harmonic, sere vocals, melody of note and delight, a psychedelic trip of wonder and rapture that carries you along on soulful, hooky, sweet riffs of sheer glee. 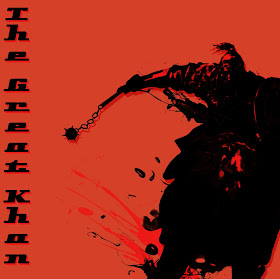 THE GREAT KHAN - "The Great Khan"

The sound has a southern feel to it, but the origin is the Middle East. Greg Buzzer hails from Tel Aviv, Israel and has been the driving force behind Buzzer since 2004, but this time ventures out on his own, delivering a classic set of stoner rock goodness - 7 wonderfully rendered gems that are chock full of monster riffs and blazing solos topped off with Greg's macho, raspy vocals. This album is aptly named for the great Kha Khan as it resembles an armed campaign that rolls across the land in a thundering, unending roar of sound and vibration, power and portent, destroying all before it, leaving nothing in its wake save quivering masses of demolished victims. There is nothing in history quite like The Great Khan, which in this case is a wonderful thing.

As with all gifted artists and musicians, Greg displays an adept ability for composition, creating songs that upon first listen are hard rock in nature, southern in flavor, but closer inspection reveals songs that are balanced perfectly within the overall melody, allowing hooks and riffs to develop and deliver, and creating room for all instrumental participants to showcase and shape each song with their own exceptional sound.

The opening song, "Eye For an Eye" sets the tone with a blitzkrieg assault that is equal parts raw power and timely execution. The solos are perfectly placed and beautifully rendered while the riffs are mouthwateringly spaced throughout, complementary when solos are blazing or when vocals are on point, or leading when hooks are instead established.

"Papa Was an Alligator" is obvious in its intent to deliver southern fun where life is unique and often provides one of a kind experiences, just as does this song commemorating a slice of southern life, unique in flavor, full and rich in experience, and incredibly gifted in ability.

"No. 4" has a wonderful tempo, clipping along at a near perfect pace, somehow tapping into the tribal rhythm deeply embedded into our dna, stirring the ghosts of indigenous dances centuries cold, but somehow now brought to life, blazing and hot in all its perfection and sheer pleasure. If radios played rock songs in their agendas, this one, in my opinion, would make for one of the more anticipated tracks in daily rotation.

"Lay Me Down" delivers a slowed down tempo, which allows for the power of guitar and vocals to kick up a notch. The song is powerful and unyielding in delivery, forcefully moving forward in near perfect tempo.

"Dia De Los Muertos" has a bull fighting flavor to it with herald trumpets interspersed throughout, accentuating the tale of woe and loss that The Great Khan relates in its typical methodical and powerful unfolding of riff and solo. The solos in this song are also accentuated with trumpetwork that is at once unique and well suited.

Overall, this is a powerful and pleasurable journey of unique, artistic, and enjoyable metal music showcasing an exceptional delivery of instrumentation and vocal stylings that present the listener with a radical, memorable, metal experience.