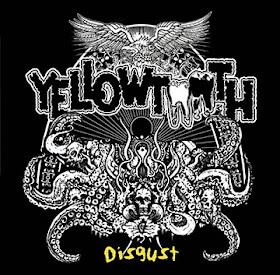 I can't say I've "visited" Michigan City, Indiana. I had to pull off Interstate 94 last fall when my son nearly shit his pants on a return to Illinois from Michigan. The exit didn't take us far into town, and I left without giving Michigan City another thought. I'd failed to recall that Heavy Planet years ago featured the down-tempo, beer-guzzling sludge trio Yellowtooth as a New Band To Burn One To. It's too bad; these guys would get along great with my wife.

Just this past week, Yellowtooth released Disgust (Orchestrated Misery Recordings), a ten-track diatribe of shit-caked southern indigestion that buzzes better than a lipper o' Skoal. The sound is thick and damp, while the mood is dark and malevolent. There's no shortage of everything you'd expect from an excellent sludge record, but the band set themselves apart by leaning toward doom, nodding to southern rock forefathers, and spitting a barely detectable whisper of harmony here and there. Tasty stuff.

Wizard Dust opens with an immediate chop-riff-chop dynamic that is nearly buried by a low bass grumble. Henry McGinnis provides a gruff, glass-chewing vocal that perfectly marries the filthy sludge churn. His guitar pulls away from the mire just long enough to break into a middle-finger solo, sailing over a hard-hitting rhythm and shooting straight up your ass. That intermittent chop is revisited on Prophetic Ramblings. Quick and thick with a dusty shred and murky low-ends, the track keeps a torrid clip. The choppy back-and-forth is led by Peter Clemens' bass, strung through the album like hot razor wire.

The heavy-handedness of Burning Daylight and Traitor demonstrate a penchant for an arcing pendulum of doom. Burning Daylight's judgment day sound is evil and unforgiving. The slow burn gives way to a guitar gallop as listeners are dragged by their heels. Yellowtooth are laughing every time you squeal, as the under-lighted vocal creeps alongside buzzsaw riffery. Traitor, on the other hand, punishes slowly. Ed Kribs' drums were recorded in medieval Romania on this drudging doom return. Ominous clouds break on a lifted tempo as McGinnis' fretwork burns down villages. Oh, and that simmering, electric bassline can't be ignored as gargantuan riff-stomps drive in the dagger.

There's a surprise or two as the album's thorax hits its stride. 75 Black Pontiac is a (kind of) hopeful and harmonious change of pace. The massive riffs haven't fled, but the rhythm isn't slung as low as the other tracks. You could say guitars are responsible for the massive directional shift, but you'd be impatient and proven wrong. Yellowtooth return to the grip of stomach-knotting sludge, while a stoner roll and sweet solo later juxtapose the wet-blanket vocal prevalent throughout. Following a similar trajectory is On the Trail of Lewis Medlock, which is only slightly more accessible than what we've come to expect from Yellowtooth. Southern-fried rock elements abound and we never quite leave the bog, though there's slightly more melody here as the tires spin. A vengeful stomp through thick, dense timber relents and Clemens' bass again simmers.

The riff-driven, crackling-ember patience of Soulstalker's opening moments is quickly met with a layered toilet-gurgle, picking up on a grinding sandblast. The engine purrs with malignance, guitars break free and cruise through Dimebag-ish pullback, and Kribs' double kick-drum attack sets the pace. But the Dimebag influence is most noticeable on the smoke-blown, smoldering romp of The 11th Hour. The track is Yellowtooth at their finest, peppering rhythmic drops amid the hollow guitar fuzz. We move from a cool southern jam into a fever-pitched sonic assault, chugging home on ashy swill. These fuckers just set fire to everything the first nine tracks achieved. This closer has it all.

Disgust is a changeling; it's gonna sound different every time you hear it. Whether it's the choppy, stoned rhythms stealing the keys and going off the map or guitars climbing the bell tower, there's a truckload o' stickiness here. Yellowtooth take their pedigree (these guys cut their teeth in some pretty awesome bands) and chuck it from an overpass. This filthy tumbler pairs well with road sodas as you kick up gravel and take out some dickhead's mailbox with a crowbar. "Southern-fried stoner-sludge-doom"? Fuck it. It's heavy. It's bad-ass. And it's perfect when you're chasin' Beam with Busch Light. 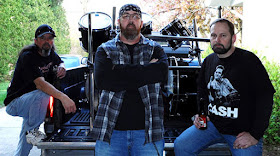