Remember that excellent night some six months back? ...  You don't?  Come on... It was the night after Heavy Planet introduced you to Wyoming's Beastwood and you woke up hung-over as sin, covered in that 'jag-offs' (ignorant prick in Pittsburgh-ese) blood.  Well, the hang-over isn't over sweetheart.  That's right. Beastwood is back with their customized NOLA sludge and southern rock sound just in time to bludgeon some innocent skulls.  The album's name is Alabama Space Witch, and although packing similar fire power to their previous release Sex Devil, Beastwood has found themselves growing and carrying the torch Southern metal-heads lit so many years ago.

Now, if that little intro didn't give you an idea of what to expect from the mighty Beastwood, snap out of it Dorothy, you're not in Kansas anymore.  These dudes thrive on some seriously muddy grooves, and [I don't like to single out pieces of a band that have such potent chemistry, but...] Jake's vocal contribution is the agro-icing on the cake.  The onslaught begins with album opener “Galactic Bison,” which (A) would make a damn fine nickname but also (B) makes a damn good way to get the mud slingin' started.  “Trails Beyond Johannesburg” has a tremendous slow chug of steady grooves that found itself a personal favorite of mine.  The grooves continue to pummel, and the vocals scathe, bringing to thought the question, "Just how the hell do these guys do it live?"  I'm curious because we rarely hear the sacrifice and dedication on studio recording that you experience on a Beastwood track.  Amplify and intensify that track in a live audience pushing back on Beastwood and ask, "How do they keep up?"  Maybe one day I'll be lucky enough to find out.

The album isn't all blood and sweat though.  Beastwood throws a nail in the boot stompin' towards the end of the album and its name is “Man of Many Names.”  What plays as an 'easy' listening Beastwood track (if it's possible to have such a thing) adorns Jake's clean vocals and some of the slickest acoustic pickin' the underground scene has heard.  “Man of Many Names” is sure to stand out in this crowd of thirteen mosh-happy tracks, whether a favorite or not. 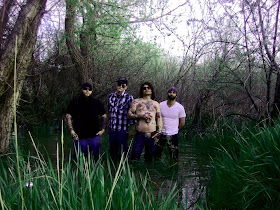 I can't help but recall my first impression of Beastwood stating, "The music embodies the musicians diligent nature, proving that hard time and practice can create kick-ass metal." After having this second shot of Beastwood, I believe I have to add the word 'fun' to that statement.  Why you ask? Because these guys are dead serious about their dedication to the music, but at the same time they are having a great time.  The gang buckled down, traveled and produced one of the finer records in 2012.  Yes, listeners will find some filler...some unwanted and some wanted, including a quote from Eastwood in “Unforgiven.”  I can, with confidence, say anywhere these tracks are spinning and anywhere Beastwood is performing, a good time is surely being had.

**As I have in the past, I discovered a beer that I found myself drinking during the spinnin' of this album and think the combination complements one another quite well.  So, get out there and pick yourself up an Avery Ale to the Chief and save it for the official release of Alabama Space Witch.