I went through an extremely long spell of time where discovering new music, or more accurately, new good music, was a rarity. Of course I was using mainstream sources to provide this for me for the most part, which two decades ago meant the local 'hard rock' radio station. Word of mouth was probably a better source for discovering new music that was worth listening to back then, but no matter the source, rare was the new album that had me stitching my face back on after the first go 'round on the turntable. Two decades or so ago that began to change a little with my introduction to the interwebs and online radio stations that would play some stuff out of the mainstream. Those stations typically catered to the college crowd and were heavy on 'indie' music, which wasn't heavy, but at least some of it was fresh and good, a modicum of it anyway . . . you know, just like the radio. So, I figured that's just the way it was because that's the way my rock n' roll world had rotated for decades. And then one day, taking advantage of Amazon's feature "Customers Who Bought This Item Also Bought" I discovered Kyuss and Sasquatch, and the floodgates opened, revealing not just a whole new world, but THE world I had always dreamed of, one I always wished could exist, where the guitar was king and the riffs were always . . . primal . . . and here it was! Not long after I discovered Heavy Planet. Holy Shit! Every day a new band, a new album of near perfect rock! I can't use enough exclamation marks to express my excitement. And it got better because, as you may have noticed, I now write for Heavy Planet, so the dream has soared. All of this to say that there is an inordinate amount of truly great rock n' roll out there, music designed and played the way rock was meant to be. Today, I introduce to you two of THE very best albums I've heard recently, starting with Red Desert's "Damned by Fate" and moving to Enos' "Chapter 1". 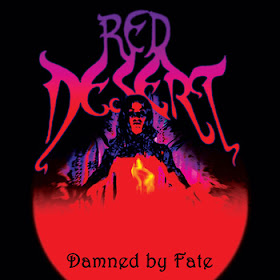 Red Desert as an entity have been around since 2004, with the typical stoner/doom rock band history of losing and gaining bandmates along the way, but always focused on playing their undeniable vision of heavy, low rock, never losing enthusiasm throughout the 8 year journey that has taken them to the point of release of their first full length album just this past month. "Damned by Fate" is a follow up to 2008's EP "18 Wheels", although the so called EP carried 6 full length songs. The former album was comprised of some mighty tasty rock n roll tunes, but in the 4 years between its release and the August, 2012 release of "Damned by Fate" Red Desert fine tuned their music by down tuning to an incredible, almost primordial degree. The music on this album is the epitome of the stoner sound, with an earthy salvo that rivals the mightiest Richter rumble combined with a champion summertime thunderstorm. The sound Red Desert have produced on this new release is satisfying and thrilling, providing deadly and dangerous reverberations that could shatter the quake proof glass of home and car, or force you to put that stereo warranty into effect once those high powered speakers get blown away by the massive riffs offered up on each song of this superb album.  "Damned by Fate" immediately gets thrown into the 'album of the year' cauldron for consideration in 2012.

Red Desert have managed to establish a style that is fresh and genuine, easily recognizable as their own, with songs that reflect their tremendous ability and energy, each one worthy of being someone's favorite. For this humble reviewer, the opening track "Older No Wiser" (what a great title) almost immediately unleashes double digit g force riffage intensity before transitioning into a first rate rock song that epitomizes tremendous stoner qualities with the big fat guitars and bass, plus a clean, crisp trap attack. "2012" has a higher tempo, with scorching solos and blitzkrieg drums blasting away on top of the heavy and low guitar chords and bass riffs. There is no wannabe songs on this album, nothing that doesn't belong, no shortage of ability and talent with this group of in your face, in your soul rockers. 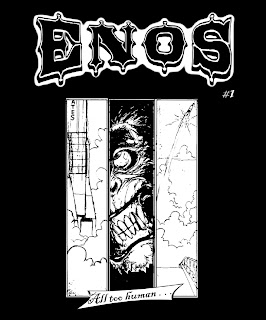 "Chapter 1" has been out for a while now, so it's not new in terms of chronology, but we've not reviewed it up to this point on Heavy Planet and it is a damn fine album from a damn fine rock group that deserves attention. It will soon enough be eclipsed by a newer release from Enos, hopefully before the end of the year, so to prime the pump you might take this opportunity to see what these guys are all about. What you'll find is a band that manages to bring both heart and polish to their music. The album is superbly produced, without skimping an iota on heart and effort. The guitars are huge, and down tuned enough to be quite enjoyable upon first and all subsequent playings. Drums are crisp and clean, adept at providing a rhythm while providing something special that will likely crack a smile while cracking your neck. The bass rivals the guitar in both presence and signature sound.

"Chapter 1" tells the story of Enos, the last chimp to go into space for the U.S.A. prior to John Glen's epic mission. Enos, the band, have done a great job of creating a collection of first rate fuzz that also tells the story of this brave and unusual animal. Along with the EP, Enos have published a comic book relating one version of the chimp's adventure into and return from the ether, available from the links below that accompany this review.

Another interesting aspect of Enos, they have been signed by Stargun Music out of Great Britain, the same label that brings us the highly rated stoner / psych bands Trippy Wicked and the Cosmic Children of the Knight, Stubb, and Steak, among other great rock bands from the UK. Stargun Music may very well rival Small Stone Records in the U.S. as the best rock label, while Enos certainly sits in the pantheon of great rock artists, proven by the superb album "Chapter 1". I am eagerly awaiting Chapter 2, regardless of its true title.