New Band To Burn One To: HELM 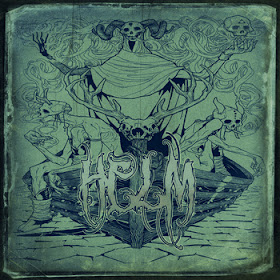 HELM started in 2003 with members of Hard Charger,TroubleStarters,IRONFIST but only start playing actively in early 2011. The band hails from Fredericton, New Brunswick, Canada but currently resides in HELL.


"While not exactly a "new" band, Helm is definitely a band you want to "burn one to". Combining an abundance of doomy riffs with thrash rhythms and an old school metal feel, Helm blast through seven tracks on their latest self-titled album. Unbeknownst to most of the world, go ahead and do a Google search, this album was released in October 2011. Although the production is a bit inconsistant, the music itself reigns supreme. The vocals snarl and groan, providing a thick layer of scum amidst a rapid barrage of thrashing drums and crushing guitar riffs. Standouts on the album include album opener "Lil' Bit O Country", the horns high death and roller "Lot Lizard" and the furious thrasher "Maximum Death in Minimum Time". I would say the band sounds maybe a bit like Motorhead meets Entombed or I could be way off. One thing is for certain, this band should not go unnoticed any longer."