New Band To Burn One To: TOMBSTONE HIGHWAY 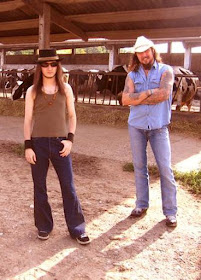 Tombstone Highway was originally shaped on the muddy banks of the mighty Po'/Padus river (the longest river in Italy) in Piacenza. These rural places and their folklore surely have influenced the creation and the mood of the band; Black Sabbath, Lynyrd Skynyrd, Doom Metal, Southern Rock and traditional Blues and Bluegrass (with the added heaviness of low-tuned guitars and bass) provided the musical inspiration! The band was born in the summer of 1999 under the monicker of Leaf Season Death (L.S.D.), from the will of HM OUTLAW and S.O.B. . They practiced for several months as a 2-people outfit, but due to the lack of other members to complete the line-up, the 2 guys grew bored and respectively joined forces with other bands, to pursue different musical ventures. In 2006 the 2 guys decided to work again together on the band and they started writing new material and to practice again, then shortly after Mike B. (from the Post-Grindcore band Viscera///) joined on Bass, and the band's monicker was definitively changed and set to TOMBSTONE HIGHWAY. After some rehearsals in their barn near the Padus river, the guys entered the studio (in November 2007) to record the first official EP, appropriately titled "Padus River Graveyard Blues". The EP is spread around in a few copies and used as a promo-CD only for labels, as well as a gift for a restricted circle of friends. After a hiatus due to commitments of the members with their other respective bands, as well as the departure of Mike B., HM Outlaw and S.O.B. started again to write new songs and rehearse as a 2-people outfit. They currently recorded the first full length album, titled "Ruralizer", and they're searching for a suitable label to release the album internationally. Some session-members on guitar and bass will be added subsequently to play live-shows.


"While technically speaking, Tombstone Highway is not exactly a "new band". The band has been toying around with their gritty southern metal influenced sound since 1999. Only recently (2006) has the band gotten fixated on a name change to go along with their down-home aural bludgeoning. The foot-stomping madness ensues as soon as the play button is pushed. Scorching fuel-fired riffs, whiskey-soaked vocals and a banjo, yes I said a banjo, are used to promptly kick ones collective ass. Crack open a cold one and crank up this sum bitch !"