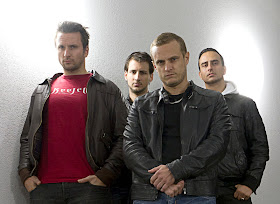 Last week on HeavyPlanet.net I had the pleasure of reviewing the album “Dead Wahines and Tsunamis” from the Swiss band Feuerzeug. It is an album I find refreshing, exciting, intriguing, satisfying, and singular. In a musical genre that is inundated with hundreds of artists worldwide producing music almost daily, much of it quite good, and a large amount of it damn tasty, as can be witnessed every single day on HeavyPlanet, Feuerzeug have managed to create something that rises quickly to the top of the pile, if you will, offering up an album bursting to the brim with songs of the highest quality. Not to mention, this album has 13 separate tracks, each and every one a small masterpiece in and of itself, not one of which could be considered filler. This is a feat rare in achievement throughout the history of rock, and this little known 4 piece band from Switzerland have managed to pull it off . . . twice. Yes, so, even though their first album, “Drive Fast and Crash!” didn’t make the review list back in 2009, it, like its successor, is a large album with a large sound, ambitious in scope and magnificent in delivery.

As you’ll see in the interview, Feuerzeug tend to go beyond the standard blues, metal, grunge, and high desert influences commonly heard with many underground metal acts. This, combined with an incredible talent for song structure, and of course the underpinnings of stoner/doom/psych rock that make this style of music so satisfying in the first place are what make these four musicians from the center of Europe interesting and unique. They were gracious enough to answer my questions and were quite enthusiastic about the whole process. After you learn a little bit about these guys, please don’t hesistate to check out their latest masterpiece, “Dead Wahines and Tsunamis” available from the link at the end of this review.

Band members are listed as:

HP: Are you guys currently on the road?

David: Well, honestly...no, because producing this album took so much time due to several external factors that we're now concentrating on promoting it the best we can.

HP: What is the touring situation for Feuerzeug now that the album has been released?

David: We're working on a European tour for 2013. For sure we will play in Spain, Italy, Switzerland and Germany because we have friends in several stoner bands there and the audience was awesome! The next step is to play in Eastern European countries such as Poland (where my roots are), Hungary, Slovakia and so on because the concert audience goes completely crazy when international bands play there and we like intense concerts and electric audiences.

HP: Describe some of the crowds you have played in front of?

David: We always have a crazy man coming on stage and stage-diving at each concert, which I think means that the crowd likes us. Seriously, there are two kinds of audience at our concerts. Those who are there to po-go and are completely drunk because they heard that our music is energetic and they want to expulse their "one-week-shitty-work-frustrations", and those who are there because they are more interested in the mix we've managed to create between our different musical influences.

HP: What was your favorite venue?

David: I think that it was in Bilbao, Spain. We played in a very small bar there and the stage had been removed to have more place for concert goers... so we pushed everything against the wall and played in the middle of the crowd. This became such an intense concert, everybody was screaming, jumping, and touching us during the whole concert, it was like the end of the video-clip of Nirvana's "Smells Like Teen Spirit". A great moment!!!

HP: Any plans or opportunities to come to the U.S. and play?

David: In fact we would like to find a serious record label to release our album in the US but there are so many suckers in this movement that it's difficult to find someone we can trust. In Europe it's ok because I have my own label/booking agency, but for the US and Japan there is hard work we still have to do yet! So, if someone's interested in releasing our album, contact us! We could play in California via our contacts there but it won't have any serious effects on the future of the band.

HP: There is a huge stoner/doom presence in Europe, with dozens of high quality groups creating a LOT of great music. Do you find this an advantage? Or, is it perhaps daunting due to so much competition?

David: Well, as I entered in the stoner movement I was astonished that a lot of bands I loved were European, and that made a snap in my head. I understood that due to many different cultures in Europe we maybe had an adantage by mixing our origins and languages in a style of music that I find is one of the most open, musically speaking. We speak French, have a German bandname, and we sing in English. We have played with bands such as Truckfighters from Sweden or Monkey3 from Switzerland, both of which are good friends of ours, and even bands coming from Serbia that have an oriental touch to their music. All of them inspire us everytime we create a new song, so it's an advantage for sure.

HP: In the bio on Reverbnation it states the unlikeliness of these 4 guys coming together to form a band, much less a stoner band, due to the disparity in musical backgrounds of each of the members. Can you give us an idea of the varying backgrounds of each member?

David: Steve loves music in general, so he has played in several different bands, even a tropical music band. Terry is a big metal fan, and he also loves Rage Against the Machine. Marc is a basic punk fan. He still plays in a ska-punk band called Huge Puppies. I'm a big grunge fan, so that's why sometimes you can hear a Kurt like voice on some of the songs. We all love music in general, I mean we will never refuse to listen to a song because it's not a metal song, or because it's a minimal electro song. We're all really open about music, with that same point of view in creating a song. On the next album, for example, we put some Hammond keybord on one song. We want to explore and play with unusual sonorities on our music. We hate bands who take no fucking risks with their music.

HP: Who handles song writing duties? How about lyrics? Can you describe the typical process for writing a song?

David: Steve and I always have a good combination. I mean one of us will bring a part of a song and the other one will easily stick what he may have been working on in his pocket for later. Everything at the beginning is very spontaneous. It must be energetic and make you want to crush your guitar. If it has that type of energy and vibe then we begin to rearrange things and work on details. After that we have a huge advantage with our excellent bass player, Terry, who always has a sort of naive approach when it comes to our music and our band. He always does the right thing at the right moment to push the band forward. Finally, Marc is a virtuous drummer, not selfish at all. I mean, Steve and I will say "Hey let's try this" and Marc does it. If it sounds good then it's approved and he plays it, if not we continue to search for a good groove together.

HP: I understand there have been some big life changes for a band member or two, such as babies?

David: Yep, Steve and I got married and he has a beautiful boy he named Darrell, in memory to Pantera's Dimebag.

HP: Tell me about the name of the band, Feuerzeug. What does it mean, both literally and figuratively/symbolically? Why was it chosen?

David: Feuerzeug means ‘the lighter’ in German. We chose this name after deciding to look for a new one from our previous band name, Tesla Intoxicates, which was too long and meaningless. But with Feuerzeug we loved the idea of burning every limit we had. By this I mean, musically by mixing different influences, and pschycologically by believing that even if we are a small country in the world we have our place in the international stoner community.

HP: Tell me about the status of employment of everyone. Who works second and third jobs to support their families, who is able to live off the proceeds from album sales and tour profits? Do you rely upon merch at your venues to bring in extra income, or does it cost more than you make, typically?

David: We all have jobs because we would have to tour 7 months a year to be able to live on just our music. In addition to our regular jobs we produce, mix and masterize the music ourselves in order to have total control on what we do, how we do it, and when we do it. With no producer nor manager the first european tour was entirely booked by myself via my label Ishii Kamikazi, which has been renamed SuperChevelle.B.A. We need freedom and we only use trusted friends in different labels to distribute our records.

HP: What does the future hold for Feuerzeug? Will you be able to make more records in the future? Do you ever foresee the band becoming successful in such a way that no one has to sustain a day job?

David: We're working on a third album which is going to be even more ambitious than the previous one. We'll see what will happen. If success is here, ok. For us, we of course always want to live with and for our music. If not, we don't care so much because we have so many different projects we are working on (graphic designs, other bands, families and friends) that we already love our lives. To be professional musicians would only be a kind of utopia we have had since we were kids.

There you have it, folks. They’re young, they love life, they love music, but more importantly, they know how to make it. Here’s to hoping to make a lot of it for years to come, something with which we can help by purchasing their sweet new album at:

Plus, check out this killer video with an alternative version to the song “Evel Knievel Has Kissed the Devil”