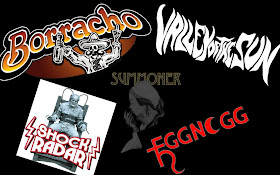 Heads up people!  Heavy Planet is taking over Gotham.  That's right folks, as part of the annual CMJ Music Marathon, which takes place October 16 - 20 in various venues throughout New York City, Heavy Planet will be hosting a showcase of the finest that heavy music has to offer.  If you're anywhere near the Big Apple on Thursday, October 18th, I promise this is a show you do not want to miss.

Kicking off the event will be the experimental stoner rock of NYC locals Shock Radar, followed by the riff slinging of Boston's Summoner (no wonder they used to call themselves Riff Cannon).  And sure to keep things heavy, Brooklyn's Eggnogg will be bringing their blend of ambient, bluesy, stoner, psych-rock to the lower east side.  In need of a fuzz fix?  No worries...Cincinnati's Valley of the Sun will scorch your soul with enough decibels to fill 10,000 deserts.  And finally, hot off their performance at this year's Stoner Hands of Doom Festival, Washington DC's very own Borracho will bring their massive groove to the stage to lay waste to whatever's left of Fontana's.