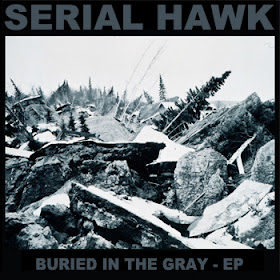 There's a storm rolling in, they'll tell us. Those assholes in suits love bringing dark news almost as much as my crazy fucking mother. So I'm inclined to stop listening to the cock-knock local weatherman and let my bones tell me what's going on. You'll feel it. At my age you will, anyway. Sit and wait long enough for that dull ache to settle and peer west. Dark clouds never brought me anything but tranquil composure on a day I would normally reserve for neurotic ramblings and Lexapro considerations.

Seattle's gold medal for HEAVY today goes to Serial Hawk, a trio we can't narrowly categorize as sludge but will certainly highlight regardless of where they belong on any critic's piss-stained continuum of labels. The sludge is there, no doubt. But so is an aggregate of murmur, flow, and atmosphere ribboned through eyelets of relentless gravity. June saw the release of the band's four-track Buried In The Gray, a plodding but incredibly centered EP that tells us the Pacific Northwest's relevance didn't diminish in 1997.

Blame Collective Soul and Brother Cane all you want; the truth is you simply stopped digging. But wasn't that the point in the first place? If something was great, you called it your own. Did you really want your best friend's hot sister listening to Melvins? Fuck no, you didn't! You wanted to play it loud enough for her to ask, long enough for her to be turned off by it, and confidently enough for her to wanna juggle your nuts because you "weren't like the other guys." So perhaps we've now evolved from our selfish interests and recognized no band is gonna progress without a push. "So get to the POINT, Seth!"

Matted, fuzzy riffs open A Fraction of Light. Bouncing like the best sludge always does, we're dragged thick and subterranean on the elements. The stop/start dynamic isn't normally reserved for the drowned and blanketed sludge lag, but Serial Hawk stretch an arm further than Page Hamilton and pull it off brilliantly. Buoyant and evolved, the stomps and spits here lay a precedent that's not only met by the album's three remaining bricks, but surpassed.

My Last Days strums and hovers with an echo that questions everything. Slow and morose but never maudlin, Adam Holbrook's bass underbelly receives a challenge of dominance from the somber riffs. This was never meant to last long, though, and when the riffage goes full-boner monstrous, listeners enjoy a Goddamn electric catastrophe. The tempo is cleverly misleading and patience seems veiled as doom elements induce a trance rather than urgency. Ultimately, a track with this much gravity can't help but stagger the weak. Here we are, wise-ass. Good luck faking it now.

A slow bounce, Justin Rodda's tip-tap drums, and an awesomely-numbing reverb peg Watch It Burn. Steady and heady, smoky with conspiracy, and stuttered with impatient notes, the track rips at itself and instruments separate into a tripped-out sprawl. Slower and heavier than any previous moment on the EP, vengeance is fully executed as warble carries out that gorgeously remorseful fuzz.

Ah, we went non-linear on this Sunday. There was no way around it, simply because the EP's second track, Silence Means Nothing, is one of 2012's best songs. Mountaintop drone smacks the doom-reverb lead-in and Will Bassin's somber tones allow for a steady haze to grow. "Hands and feet are tied," he breathes and later screams. This shaky, paranoid clamor is gradually developed through a wooded nightmare. A tandem of drifting licks and incessant hum is UNMATCHED, with the coup proving even more crushing. The vocal whisper-to-a-scream approach is nothing new, but placed atop a bed of ominous distractions? Whew. Walk through this corridor of atmospheric drone laden with titanic riffs and you'll question your own faith. Melodies claw the backs of bruised moods and Bassin's vocals grip at a doorway with both hands at the last glimpse of light. I can't believe I just heard this. You're gonna listen to this track for weeks.

As cooler months and wet weather loom, sounds like these begin making much more sense. That doesn't mean I'm warning you to brace for the worst, however. With undying riffs and thumps, Buried In The Gray fits neatly into your sludge/doom collection. Inject stoner and grunge elements and things get tastier with each note. That fire in your belly isn't dread of the shifting front; it's hunger pangs. Give this stellar EP a shot and realize it. Soothe that savage beast.