New Band To Burn One To: DISASTROID 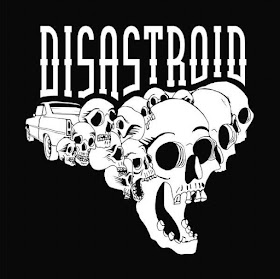 From time to time one stumbles on a record that simply kicks ass. Disastroid's upcoming LP "Money and Guilt" is no exception. This rock epic takes the listener on a ride through a minefield of tempo changes, metric modulation, and other surprises that turn your guts. By and large it employs the best that rock has to offer while showcasing refined musicianship and purpose.

Huge guitar tone, heavy riffs, driving rhythms, and melodic vocals are the salient components of Disastroid's music. While their sound can be reminiscent to some of the heroes of 90's rock (Melvins, Rollins Band, Jesus Lizard, Soundgarden, etc.), the band has a hard time labeling their work. As frontman Enver Koneya points out "We have no real formula... we just make music that pleases ourselves. It just so happens that others like the sound as well."

Enver assembled Disastroid in San Francisco from spare parts he found on Craigslist. After recording an EP on his own, Travis Williams jumped on board taking over the bass chair. Travis has had great influence on the direction of the group and over the past three years he and Enver have prolifically written and recorded three albums, most recently with Braden McGaw on drums.

Since their inception Disatroid has been busy. In addition to recording the group has been gaining fans steadily as they perform along the west coast. They've also managed to amass a devoted following in their home base of San Francisco, a city which tends to be oriented toward the clinically critical and the cynically hipster. They were recently featured in Thrasher Magazine and have accumulated tons of local and national attention. On Disastroid’s horizon is a tour to the Pacific Northwest to support of the release of "Money and Guilt".


"This is what you get if you put Queens of the Stone Age, Soundgarden, and Melvins into a blender and hit mix. With balls-out Cornell-like vocals, jagged bouncy rhythms, a bit of deafening sludge and an aura of awesomeness, Disastroid will have you stomping your feet and bashing your head in no time. These three songs are an incredible representation of what this band is capable of. Pure, fun, energetic and unexpergated rock and roll.  Only three songs, damn!"