New Band To Burn One To: HUMAN JAIL 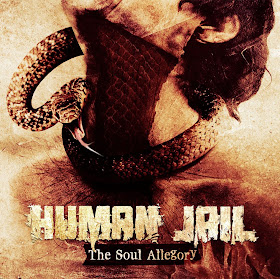 Human Jail hail from Lille, France. Formed in 2009, their sound is a culmination of stoner, southern rock and powerful metal. With a powerful voice and rythm section, they bring punchy rock'n'roll with tinted guitar riffs. While touring in France, the band shared the stage with other artists such as Karma to Burn (US), City of Ships 5fr), Zuul Fx (fr) and Headcharger (Fr). During their first European tour, organized for the release o ftheir first EP, "First Step to Breakout" released in April 2010.

The band began production of their first full length album, "the Soul Allegory". Recording started in February 2011 at C&P Studio (Sequedin, France, 59), with an album release planned for december 2011. Human Jail is eagerly working toward the album release, featuring mastering by Howie Weinberg, as well as a second tour in 2012. the band is celebrating their recent partnership with Damon Moreno of US based Inner Light Agency for full managerial representation. See Human jail now and see what everyone is talking about !


"With a killer groove, gravel-fed vocals and a southern metal swagger, France's Human Jail put their heel on your throat and don't let up. Along with a punching, jagged and down right move-your-ass rhythm, Human Jail's latest release "The Soul Allegory" is filled with catchy and powerful tracks. The guitars shriek and squeal with slithering riffs and shredding solos as the howling vocals bark at you with reckless abandon. On a few of the tracks, you are greeted with acoustic passages similar in sound to Tantric (trust me, that is all that these two bands have in common) introducing what will eventually be a total domination of your ear drums. If you dig that good ole' southern metal sound a la Black Label Society, then check out Human Jail today! Grab a fifth of Jack and crank this muther up!"