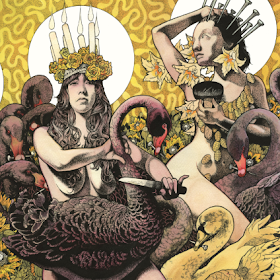 
I felt it necessary to change the Double Dose up this week, rather than hit two groups of musicians we will split a double album, due out mid July. What better album… what other album, than Baroness’ Yellow and Green. I had extremely high expectations for this release knowing that Baroness was the band that dragged me deeper into the extreme and intricate underground metal scene. With the 2009 release of Blue I found myself hooked on the dual guitar glory, John Baizley’s southern gruff and the outstanding artwork. Knowing the band were down to earth guys (after meeting them on the 2010 Volcom Tour) and their strict no compromise on creativity and live performance-as-art mentality, I had high hopes for Yellow and Green.  And my friends I was not disappointed.


Compared to past releases the first half, Yellow, overall has a more rock personality. However, it sounds natural within the progression of Baroness’ discography. The opening passage, Yellow Theme, is composed and placed in true Baroness style as an instrumental delicacy, short but certainly not a filler. The first single, Take My Bones Away, takes a huge leap for Yellow as a power anthem with a slight undertone of “throw-back” Baroness character. It is impossible not to mention the brilliance of the third track March to the Sea. For the first time we hear the new side of Baroness. The song actually sounds pretty, yes a pretty pop intro on a Relapse Records release. This doesn’t last long though, with a drum thump and quick strummed riff we are back into a more recognizable sound. Also, for the first time Baroness’ lyrics are forward and tell a story rather than obscure poetry in need of digging for meaning. March to the Sea’s lyrics in particular tell a beautiful story of heartbreaking loneliness. Yellow carries on with a mixture of smooth and easy melodies and rockin’ anthems until the final track Eula. Here begins the ‘green’ shift towards the band’s experimental realm... 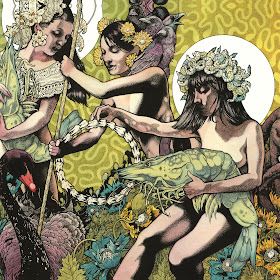 Green is the game changer for Baroness. This is the music that exposes the band and shows their vulnerability. Honestly, through this bravery Baroness will never be labeled as they once were with the Georgia progressive sludge movement. Once again we find an instrumental opener, intoxicating and seemingly picking up where Bullhead’s Psalm left us some three years ago. The music is uplifting and smoothly transitions into Board Up the House, the catchiest song on the entire record. So full of hooks you would think Torche and Butch Walker had their hands in the pot. Green now sets the stage for a direction change in the music. Looking further away from the rock persona built up through Yellow and the beginning of Green Baroness become submerged in atmosphere and emotion, building and finally apexing with Psalms Alive. The band also reminisce all the way back to Red with elegant picking and strumming found on Stretchmaker and John and Pete’s dual guitar battle on The Line Between. And where would we be without a lazing respite, giving us a moment to sink with the final moments of Green…


Don’t believe that Baroness has made something more mainstream or commercially popular (AKA sellout)… John and the gang have kept the entire movement deep rooted in art and creativity and you just have to respect that.  The guitar tones remain drenched in that Virginia sweat and new bassist Matt Maggioni (Unpersons) picks up right where Summer [Welch] left off.  Baroness have proven something unique throughout the past ten years… metal is more cultured than ever and reaching to a wider audience, endlessly. Therefore I send my deepest thanks to the band for Yellow and Green, Thank you!

If you haven’t done so yet, check out their second single March to the Sea: