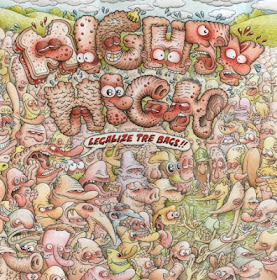 It ain’t politically correct and it ain’t safe, but since when was rock and roll about being correct or safe?

If snotty rebellion, played gloriously loud, with a big nod towards the 70’s legends of Motorhead, Grand Funk and AC/DC is your thing, then Mighty High may have just released your album of the year. Their ode to the epic virtue of cheap weed . . . Legalize Tre Bags.

Already the critics are raving about this blast of irreverent rock from Brooklyn’s finest regressive rock band. Ringmaster hailed Legalize Tre Bags as “a raucous feast of punk, weed, and middle finger attitude, most of all it is a deeply satisfying slab of rousing rock n roll.” The New York Music Daily swears that “if you like New York-centric weed jokes, you will love this album” and Jersey Beat raves that Legalize Tre Bags is “a gloriously loud blast of trashy’n’thrashy bluesy rock’n’roll .”

Now it’s time for you to find out what all the fuss is about.

Hot on the heels of Ripple Music’s international release of Legalize Tre Bags, Mighty High and Ripple Music offer you the opportunity to hear the whole album, and visit some great rock music sites to boot. Ripple Music has teamed with the finest leaders in heavy music journalism, The Soda Shop, Heavy Planet, Cosmic Lava, Grip of Delusion Radio, and The Ripple Effect, to bring you Ripple Music’s first ever Blog Tour Album Release Party.

Starting over at the Soda Shop on Tuesday, June 26th, you’ll be able to preview the first three songs on the forthcoming Legalize Tre Bags. Wednesday, the party moves over to Heavy Planet where three more songs will be debuted. Thursday, the gig is at Cosmic Lava for three more songs before the whole things winds up Friday at The Ripple Effect with the epic finale. Throughout the week, tune into Grip of Delusion Radio where Mighty High will be in frequent rotation. A smorgasbord of Mighty High madness.

Don’t miss the album that Heavy Metal Time Machine says stirs “together some classic rock riffs, punk rock energy and stoner rock madness to serve up some of the catchiest rock to come down the pike in some time.”

Saturday June 30 at The Rock Shop in Brooklyn, NY www.therockshopny.com