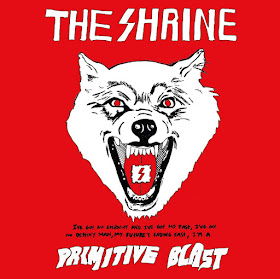 You know…I love it when a band can strip away the pretentiousness often associated with music and just have a balls out good time. You want intricate song structures, weighty lyrical themes or art house album covers? Look elsewhere my friends. The Shrine are three Venice Beach skate punks who couldn't give a shit less about those things. Their sound is a concoction of equal parts high energy and low morality that the band members themselves have lovingly dubbed "psychedelic violence." I'll just put it to you this way…if your aim is to get fucked up and make some bad decisions, then Primitive Blast should be your soundtrack.

You'll get my drift as soon as you hear the album's opening doom riff instantaneously deconstructed into the aural blitzkrieg that is "Zipper Tripper". Bassist Courtland Murphy plays the role of a musical pace car, daring his bandmates to keep up, while drummer Jeff Murray bashes out a series of punk rock beats with a striking measure of brutality. But before you get the notion that this is simpleton, three-chord, dumb-dumb rock, get a load of Josh Landau's guitar work as he plows through skull crushing thrash riffs and into a solo that would give Eddie Van Halen carpal tunnel syndrome. This is of course all done in celebration of debauchery mind you, as Josh sings the lyrics…"she says she don't want me around…guess where I am when the sun goes down."

You see what I'm getting at, right? At their heart, The Shrine are much more Black Flag than Black Sabbath, maintaining a furious punk rock pace throughout Primitive Blast that'll make your head spin. On "Whistlings of Death", Landau spits his carefree, political perspective…"got no solution, but a revolution"…over a loose groove that just barely manages to stay on this side of sanity. Bonus points to the vocalist for his mid-song, Halford-esque wail of "rev-o-lu-shaaaan." And on the album's title track he elaborates on another touchy topic, that of religion, with more tongue in cheek flair…"I've got no eternity and I've got no past"…as the band delves into hardcore/thrash crossover territory that hearkens back to their Venice Beach forefathers, Suicidal Tendencies.

Even when The Shrine slow things up, as they do on the catchy "Drinking Man", it's a short lived affair and then they're off and running again on a frenetic pace in this ode to the common drunk. "Deep River (Livin' to Die)" almost feels epic at six and a half minutes in length when compared to the rest of Primitive Blast, which in it's entirety, clocks in at just over 30 minutes. But isn't that as it should be? Isn't that sort of the intent? The Shrine plays music that, by design, gets to the point. There's no filler here, there's no pretense and no buildup, it's just pure hardcore intensity, rage and passion all to be taken with a grain of salt of course. This is punk rock for the new vinyl generation. It's crossover thrash played through Orange amps. This is what you should be listening to this summer when you hop your neighbors fence, drain their pool and skate the shit out of that motherfucker. The Shrine would be honored to be the soundtrack for such depravity. 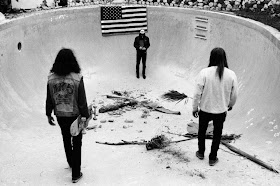