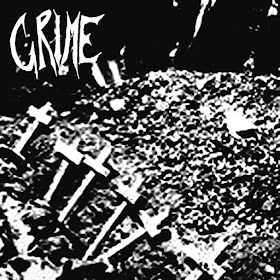 I never figured on "sludge" serving as an understatement. Sometimes the "Sunday Sludge" tag can be a stretch, yes. I'll admit it. Nothing is absolute, and if I weren't able to pair sludge with stoner and doom, musings could grow sparse. Stumbling upon Trieste, Italy's Grime, however, resulted in a complete overhaul in what I thought I knew about music's darkest, dirtiest corner. This is miles past sludge.

I hate issuing warnings to accompany a sound I believe you need to hear, so I won't. Grime's songs are slow, feculent, and deeply unsettling. If you love your family, keep this to yourself. Listening to this band effectively stomped every adjective from my vernacular, and I can only hope today's feature doesn't suffer for it. The band's self-titled debut is six servings of the dirtiest sludge metal you'll ever hear. Simple enough.

Impossible to ignore are the film samples included on the album. Cape Fear was the kind of movie my parents never wanted me watching, so reflecting on Illeana Douglas as she pleads for Bobby DeNiro's mercy could fool me into liking a shitty band. But the album's opener, Self-Contempt, leads listeners through a fiery thump of crusty sludge/doom that's heavily distorted, relentlessly grinding, and absolutely vile. As the rhythm chugs, vocals arrive to impale your body and berate your thoughts. Burning your skin, drying out your eyes, and dragging you under a rusty Chevy pick-up, the sound is huge and exhausting. Just to drive home its disgust, this lead-in slows to a smoldering fadeout. You're already drained.

The Journey fades in, rolls in pig shit, and rises and falls with Lorenzo's licks. Marco's vocals are screamed but somehow subdued, oozing belligerence. The track's rhythm is more accessible than you'd expect, but troubling themes are sure to frighten off poseurs. The song breaks and tries to crawl from its lashing. Come on. The sound coils, as if its waiting to unload. Paulo's bass reverb becomes so impatiently heavy that listeners may fail to notice the fuzzy sludge immersing itself.

If Cape Fear was a staple of my formative years, then The Devil's Rejects is the kind of film someone with my preoccupations should never watch. Charon kicks off with one of the film's more unlistenable clips and moves right into a swinging doom pendulum until sludge and fuzz poke their fingers into open wounds. Marco's pipes roll perfectly with the slow, gloomy tempos. This track grinds and chops its way into listeners' hearts, rife with contempt and malice.

I've never caught a butcher off-guard, and who would? If I had, however, the result would be Chasm's axe-grind atmosphere. Crawling to a slow, steady buzz of distortion and agony, these eight minutes serve as the album's most emotional and tortured moments. Tempos lift just after a quick fizzle and pop, but there's no filth left behind. Slow doom never leaves the track, and you'll be left buzzed from the ear-boxing.

Born Sick holds the record's quickest tempo, complete with clouded confidence and a middle finger you can hear. There's a stoner rhythm under the layers of shit, and the song's bottom-out is the perfect precursor to Wife-Beater, our endcap. The distant, crusty fade-in essentially exclaims "fuck it, I ain't goin' to class" and the stoner-sludge embers teetotal into a crunchy, rollicking grind. Perhaps Grime are easing up a bit. Or perhaps the awesome drum-stomp makes me feel like an asshole for suggesting this band will ever relent.

It's hard for most people to grasp the appeal of sludge metal. Some bands try to clean it up, give it a nice shine. It ain't gonna happen, son. So long as bands like Grime are on the bill, the filth and the fury will forever have their place, their nook, their cranny. I can't say I'd want these guys showing up at my house and rubbing all over my furniture. My wife would fucking kill me. But give the band a fair shake and discover that evil still has its place. Like it or not, you can't dismiss a band this sick.