The Album Of The Day is "Station" by Russian Circles. 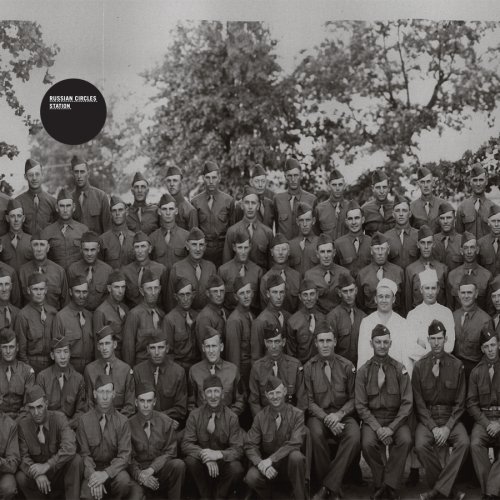 For those who celebrated the intricate heaviness of Russian Circles' debut album, Enter, or better yet saw them devastate live audiences with the sheer metallic roar of it all, Station may seem a little underwhelming — at first. Brian Cook of Botch/These Arms Are Snakes has replaced bassist Colin DeKuiper (on record at least). That said, one should expect a wall of sonic attack that would make the gods cower, right? Not exactly. Texture and dimension have become a big part of Russian Circles sound on this seven- track album. They've tried to get themselves out of the post-rock "build up and up and up and finally explode" equation that has actually hampered the growth of the music. They haven't left metal behind, but have tempered it somewhat with some softer sounds, a more gradual expansion, and layered textures on any given theme, or some set thereof. About half the album relies on this technique, and admittedly, it can be a bit frustrating on first listen because there are so many parts folded into one another it simply isn't as obvious as Enter was. Mike Sullivan's guitar playing relies as much on fingerpicked swells that shimmer and refract as it does power chugging riffs. Dave Turncrantz's drums won't announce the shifts and twists and turns, either. He jumps in with the rest of the band, playing to the sense of drama and tension that get spread beautifully over the dimensions of space and power, framed perfectly by producer-engineer Matt Bayles. "Harper Lewis" takes the ominous heaviness that Russian Circles are known for, pours paranoid ambient sonics around the drum kit, and allows Cook to let that low end bass just throb wide open, until Sullivan just crushes the entire thing with his wall of squall stun riffing. It takes a little while to develop, but the payload is big. This is also true to a greater degree on the title track. Back and forth guitar and bass thrumming becomes a push and pull between the two players until only the thudding drum fills can breach the gap. It becomes almost unbearably tense even as the tonal and time signatures shift. The same kind of metal effect takes place in "Youngblood." Think of the menacing guitar intros of vintage Iron Maiden or Judas Priest paired with the sense of distortion, detuned feedback, and the noir transcendence of Isis or Pelican. The softer tunes, such as "Verses" and "Xavi," are really compelling puzzle pieces loaded with tricky corners, intricate spaces, and floating guitar and bass parts that open the door of power rock infinity but stop at the threshold. The bottom line is that this diversity is not a lack of focus, but growth and development that make the band stand out from the pack, making the effort to spin this a few times yield very big rewards. (Thom Jurek, All Music Guide)