The Album Of The Day is "Blue Lambency Downward" by Kayo Dot. 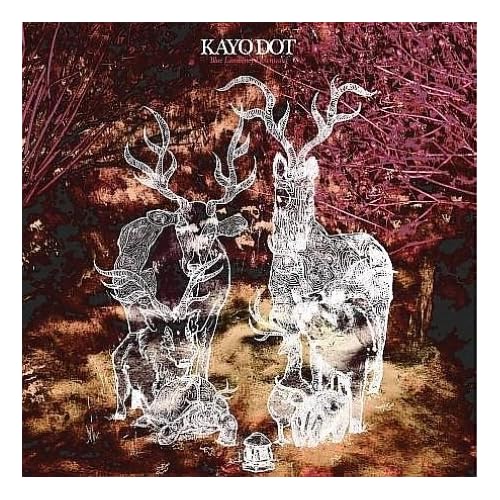 If ever there were a difficult band to pin down, Kayo Dot is it. The group's website describes them simply: "Kayo Dot is an experimental rock/modern composition ensemble currently based in New York City." That's correct, but it is also far too generic a term to capture them accurately. Kayo Dot was born form the ashes of prog-metal band Maudlin of the Well. Originally a quintet, KD began its recording career with Choirs of the Eye on John Zorn's Tzadik imprint in 2003, this was followed by Dowsing Anemone with Copper Tongue on Robotic Empire in 2006, with three members leaving the fold, and vocalist Mia Matsumiya joining the rank and file with original members Toby Driver and Greg Massi. 2008's Blue Lambency Downward produced by Randall Dunn finds the band on Hydra Head, reduced to just Driver and Matsumiya with a slew of guests including saxophonists Skerik and Hans Teuber with Charlie Zeleny playing drums. Dunn helps out on sound effects and synth design; there is a pair of cameos by percussionists Dave Abramson and B.R.A. D.. Musically, the set is bookended by two pieces in the ten-minute range -- the title cut that opens it and "Symmetrical Arizona," that closes it -- with five shorter pieces in between that range from over six minutes to just under three. The opening cut begins as an airy, seamless, beautifully and expansively constructed psychedelic pop tune that begins to disintegrate into tempered noise, reverbed guitars, and tautly driven kit work, and then just takes off into other sonic realms. This may be experimental music, but it carries a sense of rock dynamic, vanguard classical harmonies, and shifting time signatures. It is simultaneously very weird yet utterly accessible. The long instrumental section in the middle is brought back to Driver's elaborate sense of song structure -- think of Annette Peacock's most elaborate songforms as arranged by Andy Partridge and played by Magma at their most effusive and you realize the rather boundary-disintegrating music we're talking about here -- because even that description doesn't capture it. "Clelia Walking" begins with electric guitar power that sounds like the Swans covering Therion tunes, but just as quickly it gives way to Matsumiya's lithe, gauzy violin coming from the softer reaches of Witold Lutoslawski before finally meeting Eastern modalities as sung by Jeff Buckley. "Right Hand Is the One I Want," clocking in at just under seven minutes, begins as a shuffling waltz, with piano, snare, cymbals, strummed guitars, and outside melodies that are just heavenly. When the reeds and winds enter, they feel like André Hodier's modernist jazz-playing cabaret music and underscore the entire melodic and harmonic structure of the tune. But there are no edges as strange and foreign sounding as this is. The sense of drift and shimmer in the track is so gorgeous you wouldn't care what Driver was singing, and even when things become more formless and shiftless, it's as if it is the most natural occurrence in the time-space continuum, especially when Matsumiya's violin begins a tango-flavored gypsy tune in its own warm sonic bath. "The Awkward Wind Wheel" is somewhat noiser and feels like the downtown New York scene playing its own tribute to the King Crimson of the early Adrian Belew era à la Discipline. It will take a minimum of several spins all the way through to even try to grasp all that's going on here. It's fair to say that perhaps you shouldn't have to work that hard, yet there is no real work involved; there is only delight, amusement, humor, and sometimes awe. While Kayo Dot is impossible to pigeonhole or put into a single box, they also make avant music you can hum to. (Thom Jurek, All Music Guide)