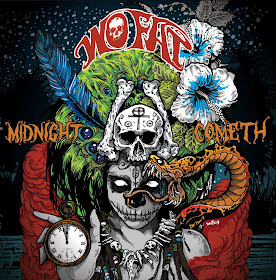 For the uninitiated, Wo Fat are Dallas Texas 3-piece riff-lords whose sound is buried deep in desert rock, under the influence of bluesy doomy psychedelia, who've been tripping to Sabbath, Hendrix and Kyuss records for years. They return with their latest long-player 'Midnight Cometh' out on 20th May 2016 - and first on Ripple Music - that features 6 tracks that entrenches their signature sound beyond 2014's The Conjuring (review here). As firm favourites over here at Heavy Planet, Wo Fat's records have regularly been featured in 'top album of the year' review posts... so it's safe to say our collective expectation has been set pretty high in recent years... Have I just jinxed it?

Well, whoever hears the first 30 seconds of opener 'There's Something Sinister In The Wind' and is not stomping their feet, has cold blood in their veins. This record grabs you by the balls from the outset and there’s little let-up. The first two tracks are a frenetic 'Friday night' groove before stepping off the gas for the more expansive and standout track 'Of Smoke And Fog', clocking in at over 11 minutes, but who's counting? Album closer “Nightcomer’ is a majestic mid-tempo groove that slinks like a desert snake, with a sneaky sting in the tail as the record combusts in on itself only drowned out by your screams of MORE MORE!! There are huge moments peppered throughout this record that surprise you which you only pick up on further listens, that compels you to hit the repeat button. And rising those waves of tempo throughout the record never feels self-indulgent on the bands part - just great riffs that get you high and bring you down again. You can already hear how ‘Riffborn’ and ‘Three Minutes To Midnight’ will be making their way straight into Wo Fat's live sets.

Production-wise Midnight Cometh is everything we've come to expect from a WoFat record - ear bleeding levels of fuzz, sweat-drenched Bluesy lead guitar, relentlessly pounding drums, and riffs for days. Is there a greater guitar virtuoso than Kent Stump in the stoner rock world right now? Wo Fat have certainly honed their craft over a six album career to today where the band are embarking on a second European tour that includes appearances at Desertfest (London, UK) and Hellfest (Clisson, France).

The band and album are epitomized by the lyric on Riffborn - ‘We live by the old ways, we know what came before. Build ourselves a purple haze. We are the Riffborn’ - and it's a statement of intent which holds true throughout. Wo Fat are a melting pot of influences, taking the best bits from the stoner rock pantheon through the ages and melding them together to forge their own style. They continue to work their voodoo, keeping us captivated under their sonic spell. You need this record in your collection...