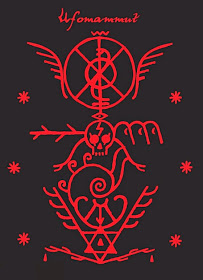 "Seth, where's the bin with all the Christmas decorations in it?"

Is she serious? I set aside a few hours this morning to saturate myself in the heaviest of Italian sludge cosmos and she's doing her damnedest to create a distraction. It's been a long time comin', but I've finally carved some time to dig into Ufomammut's DVD retrospective, XV. Countless extraneous variables contributed to this delay, but none more joy-bursting than the sound of my better half barking stupid questions about anything and damn-near everything.

Fifteen years? Hardly seems like it. These spacey sludgers have spanned an entire career evolving, innovating, and preparing lesson after lesson on how to structure and craft what amounts to a marriage of the ethereal and the unwritten. As the film points out, Ufomammut initially sought to fuse space with prehistoric men. Extracted relics have, for years, been slung beyond our galaxy's man-made bounds. They've drawn dyads so distinct, one of distance and staggering intimacy, one so exhausting that it's hard to believe it's also so immersive. This peek into the band's magick parallels Ufomammut's objective as well as it explains it.

Consider first the live twelve-track performance, a grainy, snuffed context accompanying the galactic sludge-doom infancy of early tracks like Superjunkhead and Zerosette. Filtered through black-and-white and sepia masks and laced with disorienting lumbers, you'd think you'd stumbled into a club's back gate and struck psychedelic gold. Over time, though, you're privy to an ongoing chemistry few acts can boast. Urlo, Poia, and Vita rip the same page and inflict the same glaze, performing as if they either don't know or don't care that viewers are having their senses raped by Helter-Skelter imagery. Throughout their tenure, Ufomammut have steadily swelled the importance of visually-stimulating sidecars. Here they blur lines between band, fan, and stagehand. And when Poia offers a warm smile at Stigma's end, we know that they know: they fucking nailed it.

On the documentary's end of things, the band's formation and initial lineup changes quickly give way to explanations on why they've remained a power trio. And when one former keyboardist sounds all at once vain and jealous while another dons a Lucha Libre mask and offers odd praises, it's hard to argue the band's decision to keep the fat trimmed. But where the doc most excels is not in what it historically explains, but in how it offers the explanation. Malleus delivers simple, straightforward, and chronological reflections on Ufomammut's evolutions. Much like their songs and, later, their albums, Ufomammut developed slowly over time. Godlike Snake was rough, they say. Snailking was an extension that received no promotion, and Lucifer Songs offered the band a chance to transition their sound. But oh, what followed...

This is just as Ufomammut has always been. The commitment to evolution and progress is evident throughout their catalog, and this is both directly and indirectly outlined here. Even as they discuss their early works and the accomplishments therein, the band is quick to acknowledge their shortcomings and resulting strides. It's also refreshing to learn a band as accomplished as this is open to criticism, is engaging with audiences of any size, and holds true to the roots they set down fifteen years prior. They honor fans and touring support as much as they honor their own sound, and they insist on doing it all them-fucking-selves. Awesome.

XV essentially offers two films. Magickal Mastery Live is low-slung sludge jams laced with a visual haze dripping from every moment's borders. At times, the band appears swallowed and any epileptic should turn back now. Jumpy, nervous, and laced with ancient symbols, there's no better supplement to one of the world's finest psychedelic doom acts than these eighty minutes. The visuals blanket the sounds with malevolent imperfection, crafting a full-circle experience that's a trippy cocktail of dark warps and burned retinas.

Of course the interviews are more sobering, though they're hardly less interesting. The band's DIY ethic runs a ribbon through 2012's double-album Oro (Opus Primus / Opus Alter), essentially one riff expanded into ninety minutes. The band delves deepest here, and not because the double album is their most recent. It's assertively their most complex and mature, another in a series of statements and stomps forward. Vocals are another instrument, something most Heavy Planet readers would acknowledge. But it's the visual element that's developed into the missing link, the emotive corner the band truly polished over time.

For fifteen years, Ufomammut have strung a series of increasingly expansive and fluid sounds, all interwoven and fortified with the threads of unmatched heaviness. So when the band's members deflect accolades and attempt to acknowledge the luck they've experienced, it's difficult to buy. These three men have become Ufomammut, and Ufomammut has become these three men. They set out to "play the heaviest stuff in the world." XV holds three-plus hours of footage illustrating just how they managed to pull this off.