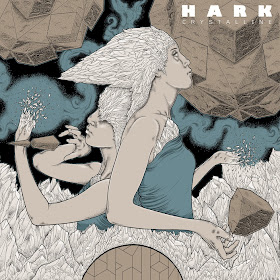 For 16 years, between ’94 and 2010, Welsh heavyweights Taint led an almighty siege on the stagnant rock scene filtrating the masses, with great energy and savagery that was a thrill to endure. Their debut The Ruin Of Nová Roma will be a record that won’t be appreciated for another 10 years probably, but it’s a one which echoes just what the scene missed out on at the time. Less of a phoenix from the ashes, but rather a pulsating futuristic time travelling behemoth, Taint frontman Jimbob Isaac has offered us a chance to redeem ourselves a second time round with his new band HARK, and their highly anticipated debut record Crystalline, released on Seasons Of The Mist.

Carrying many of his previous band’s sound forward, Jimbob (alongside former Whyteleaf members Nikolai Ribnikov and Simon Bonwick) has honed his craft to an art form that stuns and mesmerises, whilst subtly pounding away at your guts. Opening track ‘Palandromeda’, sounding like a UFO landing from the planet HELLFUCKINGYEAHATROPIA, lays as many heavy stoner riffs as it does progressive nuances. The guitar breakdowns and relentless assault of the rhythm mechanics bring you to your knees. The essence of HARK lies in their thumping riffs that are refreshing and groove laden. It would be easy to thrw the “experimental” tag at HARK, but they know fine well just what the hell they are doing, as layer upon layer of riffs lash away at your face.

Jimbob has plenty of aggressive anguish to his vocals, which can cut through your throat like a blunt knife. His range is best experienced with ‘Sins On Sleeves’ as deep curdling growls are combined with stretched out end-of-your-life gasps. Having been previously been released as double A-side with ‘Mythopoeia’ in 2012, the track as significantly lost some RPMs making it a much more dramatic doomier affair, losing none of its effect.

The beauty of Crystalline is not so much the album as a whole, but the truly destructive beauty of each song as an individual testament. ‘Black Hole South West’ is every rocker, stoner, doomers ideal song rolled up into a tight 4 minute package, ‘Breath and Run’ and ‘Scarlet Extremities’ are  breakneck metal experimentations, and ‘A Clear Light Of...’ is a 10 minute galloping metal opus that Taint became so overlooked for (not to mention Clutch’s Neil Fallon sharing vocal duties).

It would be sheer utter criminality if HARK were to go the same way of Taint, under the radar of the inferior bands of the time, leaving behind a catalogue of misunderstood records deemed “before their time” (If you don’t go and check out a Taint record after listening to Crystalline I’ll owe you a drink) . This is a record which needs time to settle in to your soul, it’s experimental without being pretentious, it’s heavy without being void of structure, and above all else, it’s a bit of a game changer.