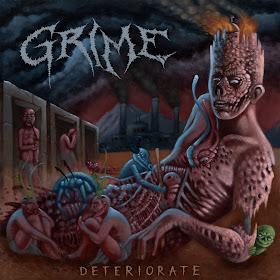 Spells of sobbing and flickering tics of anxiety weren't on the menu this morning. I awoke to discover a developing tandem of nausea and disorientation while a dullness masked the grim reality of what's really happening. I hit the showers thinking I'd feel better after scraping and scrubbing at the awful, scabbed memory of torment and violation. Nothing seems to be helping. I suppose I'll just disassociate, crawl into poor health, and fantasize on some form of violent vengeance. But let's be serious; you don't just move on from something that just crushed your faith in humanity.

We first featured Trieste, Italy's Grime more than fifteen months ago, caking our flesh with their self-titled bouillabaisse of filth, fire, and sickness. Well, things have only gotten worse, and the end result is devastating and delicious. Welcome back their unsettling audio plucks and screeching track transitions, but try not to gape as you witness Grime's depravity as a swollen, snarling beast. Torturous riffs, barbed rhythms, and more than a soul's share of induced vomiting mark Deteriorate as a gigantic sophomore stride.

Damn, this feels so dirty. The skull-splitting hatred of Burning Down The Cross is heavy, lumbering, and organ-piercing. The guitar squeals may as well be the cries of the masses, damned by fate and blackened with fire. Marco's vocals operate as both victim and offender, throwing a gurgle that can't be fixed with green tea and honey. The churn and the chortle dig through graves, all the while grinning through Chris' black-toothed drum stomp. Relentless and heavy-handed, Grime are as vile a band as you'll find.

Down By The River Of Dreg fills a room with thick smoke, a slow suffocation of the world you've known. The repetition is coated in tar, caked with blood, and by now you've realized there's no reprieve here. You're knee-deep in shit, and shifting to a slow-motion catapult pointed at the killing fields is met with the last hope that your neck snaps on the way out. There's more rhythmic movement on Deep Cut, hinting at blues until the mallet makes another crack. It's unbearably slow, demonstrating Grime's patience with their own death rattle.

For all their crushing, Grime also maintain plenty of control. Restless Man and Pills craft a zero-hour dual descent into depravity. Imagine being lifted from your feet and dangled above gnashing hounds. Riffs boil your bones and the vocal sets fire to dirty panties. Hazy and violently meditative, the album's second half is surprisingly just as unsettling as its first. Plunging deeper and chopping at your senses, Idiot God closes the album as a complete amalgam of all the band offers. Thick, malevolent, abrasive... sure. But more importantly, Grime seem to reject all that is mainstream and embrace what's utterly distasteful.

Deteriorate is one slow, steady drill to the skull as you choke on your own blood. Make no mistake, you're gonna feel degraded, sore, and ashamed of yourself for enjoying this one. Grime's rusty blade punctures your chest at a snail's pace, recognizing that the slow and dull is far more painful than the sharp and frantic. Take a shot o' whiskey and bite down on a twig. And good luck pretending this never happened.