In Case You Missed It: Across Tundras/Lark's Tongue - Split LP 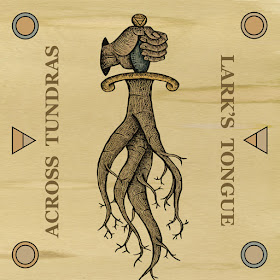 A couple of weeks ago in his Double Dose, Zac reviewed Electric Relics, the latest slab of Americana inspired doom from Nashville's Across Tundras.  And given that I was a huge fan of the band's 2011 effort Sage, I jumped at the opportunity to hear what he so eloquently described as "the soundtrack for the traveling lonely en route to desolation."  So you can imagine my surprise when I opened the band's website in search of said album and discovered yet another new record, itself barely three months old.  Turns out…back in March, Across Tundras teamed up with a heavy psyche band out of Peoria, Illinois called Lark's Tongue and released one hell of a split LP.  Of course, as the theme of this feature suggests…we quite obviously missed it, and now I'm here to remedy that unfortunate oversight.

Featuring two tracks from each band and a run time of over half an hour, this is more than your typical split 7 inch.  Beginning with the Across Tundras contributions, the album opens with a lush expanse of droning guitar that eventually gives way to a twangy lumber and Tanner Olson's whisky soaked warble…"in the ruins of the house of the rising sun."  This is the epic "Low Haunts," which by itself, easily makes up a third of the LP as it rumbles in and out of gorgeous guitar flourishes and never once forsakes the ponderous plod of its rhythm or the resonance of its honky tonk textures.  This you gotta hear.  "Crux to Bear" is the second offering from Across Tundras and it provides a glimpse into the band's heavier side.  While still managing multiple shifts in tempo, the track is a much more straight forward affair that even sneaks a catchy hook into the mix as Olson sings…"if the stars ever align, I'm as good as gone."

As I mentioned, side two of this split LP is dedicated to Lark's Tongue, with whom I was not familiar prior to hearing these songs.  On "Follow Your Nightmares," the band introduces themselves with jangly guitars that merge with ethereal effects and a resounding rhythm section, creating a depth of sound that continues to expand as far as your mind will allow.  The atmospheric stamp of post-metal is evident, so it should come as no surprise that Lark's Tongue features a couple of the guys from avant-doomsters Minsk.  And if the dichotomy between the beautifully harmonized vocals and the demented doom found on "Aluminum" is any indication, then this is most certainly a band that Heavy Planet will be keeping a very close eye on in the future.


So how about that?  Zac writes about one killer album…I go in search of it and discover not only another killer album, but a new killer band to boot?  Now that's what I call a double fucking dose.  So on behalf of my colleague, I'd like to say to heavy music fans everywhere…you're welcome.  Enjoy.
Across Tundras Facebook|Lark's Tongue Facebook|Across Tundras Website|Big Cartel|Bandcamp
Toby at 4:20:00 AM
Share