New Band To Burn One To: My God, The Heat 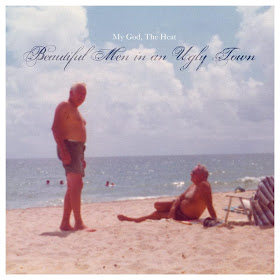 If you're gonna poke at someone, it's much more effective to interject, spit your jabs, and pull away with a swiftness that'll leave them throwing up their hands yelling "What the fuck, man?" But point your venom at a city, a trend, or an entire philosophy and you're gonna need to be pretty fucking clever and pretty fucking correct. Enter Rockford's My God, The Heat. Pancake Johnson's vocals would appear too tarred-and-weathered to spin such sharp tapestries of vitriol, but somehow the band's punk-a-billy free-association is perfectly executed in his rasp. On their fourteen-track debut, Beautiful Men in an Ugly Town, My God, The Heat roll out a red carpet to piss on all things over-inflated and over-indulgent.

The tunes are fast, punchy, and packed with enough duck-tailed doo-wop camaraderie that listeners will sing along before they even know the words. Our City, Our Shithole (a clear tribute to the Screw City) is carried by Telecaster bounces and unpolished fuzz, while the strangely gentle and warm interlude counters the track's abrasions. A punk bark-and-snarl smacks you silly after Hard Drugs and Soft Pretzels opens inside a woeful Bräuhäus schnausage windfest. It seems the entire band is after the scraps here; think Old World cobblestoners meeting snot-nosed junkies. And when every band member adds a "bah, bah, bah-da-da," you begin to understand the marriage of tradition and progress (even when your hometown can't). Yours to Destroy and it's subtle coos, meanwhile, may be the album's most delicious moment.

Beautiful Men... melds style and influence, firing on all cylinders in every direction but never losing its way. On Someday Baby, You Will Miss These Dance Moves, the warm fuzz relents long enough to give Buttermilk Dickson's slaps and thumps their day in the sun. The Continuing Decline of Customer Service in the Food and Beverage Industry is anticipatory, though the quick repetition and in-your-face rasp could've found home in the opening sequence of Reservoir Dogs. Rock-a-billy or rock-a-bully? Well, Dressed Like I Was Askin' for it says it all. The rough-and-tumble comes with the territory, son.

MGTH have reserved a corner booth for catchy twang, too. Attacking conformity and blind faith on I Actually Think This Mark of the Beast On My Forehead Looks Pretty Cool, strange hand claps would wear a bowling shirt if they weren't hell-bent on breaking glasses. The bounces and hooks are nearly as tongue-in-cheek as the lyrics, almost telling the automatons to fall in line. The snaps meeting Bassputin's thumbings may serve to cool tempers. And for all the attacks at others, MGTH manage plenty of self-deprecation. Shit... Here Comes Ricky sounds like a late-night Christmas Eve reflection, sitting on a couch questioning one's own luck. It's fun, sticky, and a complete abandonment of elegance.

The musicianship may get buried under the weight of the lyrics, poignant as they are. MGTH take aim at those clowns in Tap Out shirts, the easiest of marks, on He's Only Goin' Out Tonight to Put it in. Woody Guthrie Joins The Army's smooth groove meets that choppy pluck, but it's the dusty motel assertions that captivate. "Enlist your own sons, now get your own guns" could be picket-line material. The final "fuckin' thing!" on This Stupid Guitar may have saved the track from being scrapped, however. Don't play it down, dudes. We know you can write.

Drifting in the dark seems second nature to the band, sounding at times so dusty and distant that even America's prettiest sunset won't comfort the lonely tumbleweeds. Swordfish Trombone trots and echoes into a CB radio with effective storytelling. The track is among the disc's most well-realized, evoking visions of an outlaw hugging the back booth of a cantina, hiding from the fuzz. It's perhaps a tad melancholy, but seasoned well. And the choice to close with The Number 6 Dance is, as I see it, MGTH's crowning achievement on this disc. Bare bones country-punk a la Meat Puppets' Six Gallon Pie, the track's glorious simplicity would be deflated with any vocal. Any pretense whispered by critics is stifled at disc's end, as the track is almost a nod to roots rather than a leapfrog of pioneering shoulders.

Beautiful Men in an Ugly Town stomps and stutters with more essence and less oi! When singalongs are led this well, a doomed revolution usually follows. My God, The Heat aren't occupying anything, they just wanna let everyone know what a jackass you are. The snot-to-trot dynamic sometimes bleeds a little too much contempt (veiled or not), but four cads and a bottle o' pills craft a torrid clip of folly. When the band manages to take a breath, however, is when they peak. The short-winded sarcasm attacking long-standing issues is only half the fun. The threads of unity and joyous bluster spun through the band's live set is exactly what you'll find on their record. How many bands can boast that?