In Case You Missed It: Bloodnstuff - Self Titled 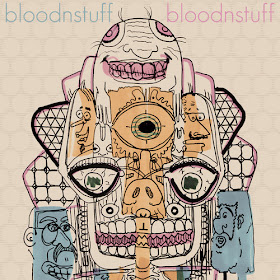 Let me just start off with an apology for being away these past few weeks. You see, as much as I’d like to believe that writing about stoner rock bands all day will somehow pay my bills, that just isn’t my reality…and a brotha’s gotta eat. Now I know you all missed me while I was gone, but rest assured it wasn’t half as much as I missed you buncha no good malcontents. So I’d like to make it up to you by sharing some good new shit that I’ve recently discovered. I want to clue you in on a duo whose self-titled debut album is generating quite the underground buzz. And when I say buzz, I don’t mean a bunch of douche-bag industry types are shitting themselves over whose gonna put out their next record. No, I’m talking about the kind of buzz that scores opening gigs with the likes of Alice in Chains and Fu Manchu. You interested in that kind of thing? Yeah, I thought you might be.

Now I know what you’re thinking, but before you go and toss Bloodnstuff in with the overcrowded heap of “two-piece” outfits who’ve incorrectly deemed the bass guitar insignificant, give me a chance to ease your concerns. You see, forming a two-man band wasn’t the original plan for guitarist/vocalist Ed Holmberg and drummer Dylan Gouert. To the contrary, down-sizing, for lack of a better term, was more of a reaction to their weariness and frustration at seeing band mates bail at the most inopportune times. In fact, Holmberg and Gouert have been mainstays in their native Minneapolis scene, having played together in one band or another, for the better part of ten years. So when the vocalist/bassist of their last band, Economy Team (quite the ironic name for what is now a twosome) failed to show up for a gig one night, Gouert convinced Holmberg that the two could go it alone. A name change later and some ingenious tinkering with the mechanics of Ed’s guitar…something about funky pickups, filters and a bass cabinet that allows him to play what amounts to guitar and bass simultaneously…and Bloodnstuff was born.

Upon listening to their eponymous debut album, it doesn’t take very long before you’ll realize that Gouert was on to something…these two really can pull it off all by themselves. The album opener “Give Me a Call” is a rousing anthem that’s as catchy as it is heavy and I’d wager you’ll be singing along to it by the end of your first listen. Or check out the band’s namesake track, “Bloodnstuff”, which opens with a prog-like guitar part, transitions into a bouncy pop number and then explodes when Holmberg plows into those bass pickups. You’ll know it when you hear it…trust me. “Fire Out At Sea” offers up another fine example of the versatility and dynamics at Holmberg’s disposal as the song swirls in and out of gentle timbres and crushing low end riffs that are all being created by the same instrument. By this point in the album, you’ll be a believer.

The rather pleasant intro to “The Cow People” is an obvious setup for something more sinister, so don’t be surprised when it transitions into an offbeat tune more akin to a carnival waltz. The song is at once dementedly quirky, not unlike something you might hear from Faith No More or Mr. Bungle, and then uncompromisingly heavy, as if Sabbath showed up for the jam. Speaking of the former, Holmberg’s vocals bear a striking resemblance to the commanding, operatic croon of Mike Patton. And those vocals take center stage on “It’s Fun to Be a Kid”, a powerful alt-rock ballad that’ll have you wallowing in nostalgia with these lyrics…”time blows over every inch of skin, slowly carving mountains, until we are dust again.”

But, Bloodnstuff save some of their best…err…stuff for the second half of the album, beginning with “One Day Roses”, which is both overwhelmingly heavy and powerfully melodic. Like previous songs, this one is propelled by Holmberg’s authoritative vocals, only here they’re met with equal force by an infectious, bouncing rhythm. It’s difficult to pick a favorite, but if you’re looking for a quick sample, I can assure you that this one won’t disappoint. “Build a Monster”, which is an entirely different beast, opens with a militaristic beat from Gouert that’s joined by an eerie combination of high end fretwork and low end strumming from Holmberg. The song eventually becomes so spastic and complex, it’s like listening to The Black Keys cover Between the Buried and Me.

Then, in stark contrast to the intricacy of that song, the band restrains themselves for the better part of “Diet Cola” which begins life as a mid-tempo dirge and then grows into a full-on, open ended jam session. Pay attention during the last thirty seconds when you can truly hear Holmberg’s “dual-band” instrument shift from guitar into bass mode. Similarly, “Oh You Petty Failures” opens subtly and then builds in intensity with some truly fleet fingered fretwork and percussion from Gouert that’s as propulsive as it is pummeling. The combination of adept musicianship and soaring vocals on this one (see video below) is definitively modern “prog-rock” and if you aren’t moved when Holmberg wails “there will be blood on our hands, see through the weak and simple minded,” then you’re in the wrong place.

Bloodnstuff’s finale is “Titans,” a song which is built around a pounding tribal beat from Gouert and a jangly rhythm from Holmberg. Vocals are delivered calmly and seem to ascend and hover just above the din of the music until the song collapses into a pile of feedback and discord, leaving you with nothing but your ringing ears and that dumb look on your face as you try to understand what you’ve just experienced. The answer is yes…those songs were played by only two dudes, and no…there were no loops, recordings or other such studio magic involved. That’s what a little innovation and perseverance sounds like my friends. I think you can see why Bloodnstuff’s debut is generating that buzz I mentioned earlier. So take my advice and check it out…you don't want to be the asshole that misses out on this one.