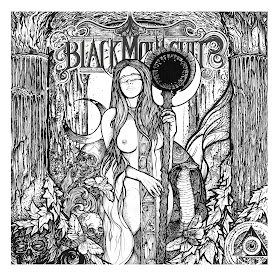 I've not long woken up (it's after midday) and I sit down to write todays review and I'm still recovering after a heavy weekend away partying like I'm still 20 years old. I feel done-in, baked but satisfied; a couple more wrinkles added to my nearly 40 year old face and I'm trying to keep warm by a wood burner. It's snowing outside even though I can see blue skies. It's the fourth day it's snowed here and the mountains I see in the distance glow white under an early spring sun.

I really didn't know what I was going to review today but after flicking through a few demos and promos and not really getting excited about what I was hearing, I came across an album that suddenly got my blood pumping and had me blasting it out at full volume and rocking out to this finely crafted slice of stoner rock. I love a band that can do that. From the opening chords of the first track, your attention is grabbed by the balls and you are captivated by the sonic goodness that pours forth from your speakers. This band did that to me, and it has been a good while that something like that has happened so this band definitely deserve a review.

They are Black Moth Cult, a stoner band based in Toulon, France who recently released 10 tracks of highly accessible fuzzy and heavy desert style stoner-rock in the form of "The Fountain of Tantric Worship".
From the opening chunky bass riffs of the self titled track the stoner grooves are played with hearty passion showing that here is a band that take their music writing seriously, and boy are they good at it. They remind me at times of the now sadly long ago ended Astroqueen, with uplifting riffs that drift around huge vistas, sounding a celebration of Californian robot-rock and Swedish fuzz. This is driving music with the destination being outer space as each track launches us to soaring heights, leaving the earth behind in a blazing rocket of stoner-rock fire.

Stand out tracks for me are "From the Woods" with vocals that sound a bit like Stone Roses singer Ian Brown making the track almost stoner indie music and quite radio friendly. "Six Love Goddess" that shows Black Moth Cult's music writing skills in a blinding white light of riffs and drums in a many leveled track that takes us from QOTSA inspired sections to hugely uplifting stoner-rock dimensions. So many changing moments are crammed into the 4 minutes 26 seconds of that track that each section could be a track of its own. "Scum Sculpture" which is a hugely satisfying behemoth of classic fuzzed out stoner-rock in the vein of Astroqueen and Colour Haze. The riffs are delivered on this one in thick waves of crunchy tones that slay with the mighty hammer of low-end grooves. "Vintage Wines" being the last track and one of 2 tracks on the album that has Black Moth Cult going into mellow territory. This ender is a sumptuously jammed twinkly starred atmospheric story told under a clear night's sky and is a great way to end this great album.

It's a joy to listen to. Indeed the whole album is a joy to listen to. I am glad I have discovered Black Moth Cult today. I have found a new favorite band, one I will be keeping a keen eye on for future releases because with their level of song writing their next offerings are sure to be something awe inspiring, which this album already is.