Diversity is the name of the game today, tokers and smokers. We start off with standard straight up hairy ass rock and roll. Fun and furious. Loud and raucous. The best kind of rock, not just because it rocks your nuts off, but because it wasn't made just for the sake of it. It was made by design, and the design is retro rock genius, the kind of rock you picture powering up out of primordial rock soup in a 4 wheel drive hemi and plugging into the first stack of amps available. We don't slip away from genius on the second album, but we do veer away to a whole new rock design spectrum, one that isn't so straight up perhaps, one that isn't perfectly derivative, one that may have ancestors who crawled out of the primordial stew, but whose most recent relatives are scattered about punk, new wave, stoner, and grunge nursing homes. The loud and raucous remain, as do the fun and furious. The asses may not be quite as hairy, but there's hair in there somewhere, and lots of fuzz. 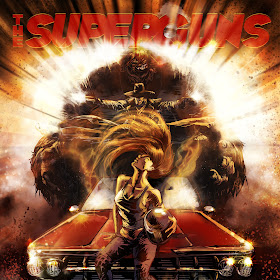 As we did last week, this week we visit a band from Melbourne, Australia, The Superguns, who forged themselves and their sound, as so many bands that play this wonderful kind of music do, in the bars and venues scattered around their city and surrounding townships, as well as from numerous jam sessions in their studio, which happens to be a former bordello, perhaps lending its spirit to the genius of the song making of this 4 piece rock dynamo.

The four ass kickers of The Superguns have been together for more than a couple of years, and are now releasing their first collection of original songs with 5 songs that fit smoothly and easily into the best rock and roll experiences - the guitars are big, loud, and soul searingly brutal - the bass is straight from dynamite blasting grounds - the drums perform the dual job of driving the music while entertaining with virtuoso fills and rolls -  and the vocals . . . if, instead of auditioning for vocalists for your band you had software that created vocals according to your specifications, Jackyboy's sound is likely what you would come up with for this type of hard driving, balls to the wall rock. All of this musicl ability is bound together by solid song writing that packs each with hooks aplenty, clever and contagious choruses that'll have your head spinning the songs long after the power to your music player has been removed. Archetypal images come to mind when listening to this music, images of big classic cars with 454 cu. in engines, sunglasses, hair, bikinis, liquor bottles, the Zig Zag man, huge car speakers, smoke, sweat, black concert tees, and huge smiles as the car roars down the road, the speakers blaring a valhala vanguard. This music is big and rambunctious, party music for the ages, so those images come easily, but what never gets lost within the gargantuan riffs is the melodic platform base upon which it all stems, because these songs are both bodacious and intriguing, instantly satisfying as well as timeless.

"Love Pump" opens the 5 track stand in that bodacious and conspicuous fashion already mentioned. Jackyboy and Badalassi (this has to be one of the coolest natural names in rock history), in vocals and drumwork, set the pace with energy and vigor that Barrett and Langman have no trouble matching. The song bleeds straight into "Big Foot" without hesitation, a slow down in tempo, but the same intensity in everything else. The chorus on this song, with the hook 'Big Foot's on the loose', will no doubt stay with you for awhile. The solo section of the song provides fun more than giving some sort of demonstration, which makes for a much more enjoyable experience, because while Barrett wails away on his strings, Langman is simultaneously blasting away with Badalassi, creating a huge and astonishing sound.

"Whiskey Fist" . . . man if there was ever a great party rock name for a song . . . carries the intensity along with a quick, up tempo, riff filled monstrosity that ends in a spiral of Panzer blitz ferocity. Mind blowing and mouth watering all at once.

"The Superguns Must Die" closes the EP with what is likely the best track. It's full of fun and fury, blistering riffs blasting away at Gatling gun speeds, chewing up and spitting out the huge rock sounds that are the hallmark and exultation of this awesome gang of four from Melbourne. The Superguns, ladies and gentlemen. 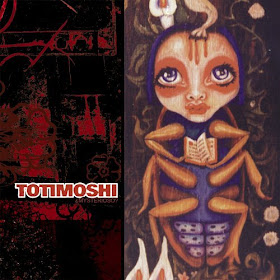 I have been listening to this album all week, enjoying it immensely, knowing I wanted to review it today. I found this little jewel on bandcamp.com with a release date of August 2012. Well, it turns out it was released much longer ago, originally, but rereleased this past year. Zac reviewed their latest album, "Avenger", back in November of 2011, and later named it to his top 10 albums for 2011. Between "Avenger" and "Mysterioso" are 2 other albums, and one preceding it. They are not all in one place, however, not that I can find anyway. Doesn't matter. What matters at the moment is this album, regardless of history. I guess I'm doing a second day of  'In Case You Missed It' because apparently I missed it and didn't know better til now. It's worthy of a listen, do not doubt that, though, regardless of release date. It's fresh and new to those of us that missed it the first time through.

What Totimoshi have produced on "Mysterioso" is an intriguing blend of varying styles that aren't mashed for mashing's sake. In the end, what matters on these songs is quite obvious, and that is the music, the quality of the song, and the level of passion and ability they bring to the execution of their music. This all is pretty amazing when you consider the sparsity of instruments. One guitar, one bass, one trap set and music that sounds as big as 5 three piece bands thrown together.

The starting point for the album is "Float", a very cool and simultaneously heavy number that blends a myriad of sounds throughout the length of the track, churning heavily away on all instruments, but coolly laying down the vocals. Stick with it from beginning to end, over and again, and you will find something new to chew on quite frequently.

The second song, "Screwed" just makes me shake my head. This is because it uses sounds that aren't normally used, perhaps experimenting a bit, or perhaps using something the band is familiar with, but something I'm not quite familiar with myself. The thing is, it works, and it works very well. It's an intriguing and pleasing song. I've heard music in the not so distant past, by quite talented musicians, that were 'experimental' and crap for it. So, I appreciate making the sound and the listener's experience the priority as opposed to being top dog artist, or whatever. Pushing the envelope is great, but not for the sake of pushing it, instead for the sake of discovering something newly fun. This may be an older album, but there still isn't much music out there pushing boundaries the way Totimoshi has here. "Screwed" is an absolute blast, containing interesting and fresh sounds while delivering a song that resonates primally.

"Cellophane" is chock full of sounds so big I don't think a whole roll of its namesake material would contain it for long. It's the type of song that starts at a certain level and slowly builds up toward something monumental. The thing is, the beginning point is huge. The guitars are heavy, distorted, fuzz laden beasts of burden, that gain momentum as they climb UP the mountain, reaching the acme and crashing back down in a blissful cacophony of bass bombs and a stoner/grunge avalanche.

"The Bleed" kicks off with gargantuan drums that never let up, basement busting bass, and crazy bandsaw guitar paired with low tuned stoner riffs. Sheer joy reigns throughout. "Dirt Farmer" is quite like minded delivering a full instrumental take on the sound, intensely piquing interest along the way.

"Oblivian" is the penultimate song, and starts out with a super cool riff evolution. Totimoshi are good at everything they do, but loud, heavy, booming, delicious, fierce, fun guitar is where they excel the most, and thankfully focus the most. The drums on "Mysterioso" tend to match that intensity as does the bass, instruments too often relegated to background noise, but never out of earshot here.

The closer is "Horselaugh" and in a similar fashion to the rest of the album the guitar here is big, bold, different, and engrossing, moving through variations that make the dog drool flow. A stripped down bridge where the vocals are the focal point brings something not heard so much on the previous tracks, adding to the incredible variety and entertainment this album provides.

This may be an older album, but it is quite worthy of listening to today, and any day from now til the universe goes dark.