Album Review: Black Science - An Echo Through the Eyes of Forever 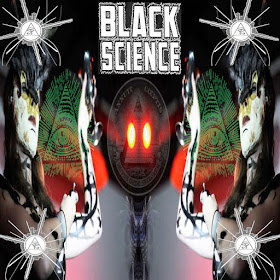 With the new Flaming Lips album approaching, one would think the new Black Science album would serve as a perfect appetizer to that, but their album is as good as anything the Lips have released. Both bands share a number of similarities, particularly the vocals. They both seem to be influenced by the same types of singer, the post-Neil Young indie rock voice. Black Science are also testing out new dimensions of psychedelia, exploring further than most bands do. Moments throughout the record, you will hear melodies melt into other instruments like early Pink Floyd with the delay pedals turned up and sometimes exaggerated for artistic yearnings. This is obviously drug-induced music composed for the exceptionally open-minded. But don’t let the wild production fool you, this band can rock with the best of ‘em. The rhythm section is tasteful and tight. They are not a sloppy drug band, but a well rehearsed group of musicians messing with soundwaves and sonic euphoria. I feel like this is rock and roll for people who are bored with rock and roll. It offers more than just a good song, but experiments with the ear in ways no one has tried. If stripped from all sound effects, the songs would still be good, but they craft something more, music that grows inside you and develops the more you listen. Very few new bands can make a record like this, as focused as this and as trippy at the same time.

An Echo Through the Eyes of Forever is a journey though space and time, if one had audio binoculars and a diverse record collection spanning the 1960’s and 70’s. Perhaps the music of the future is in those records of the past. I find that the most intriguing element of this band, that they somehow sound like the future by mixing all their influences of the past. It’s not retro, but also not completely irrelevant to the classic rock albums we all grew up on.

Track one- “First Contact Manual” opens with underwater vocal effects and lyrics like “increase the dosage and think of me...” while the music is similar to Pink Floyd, slow and dreamy, yet still metronomic. I would imagine a Salvador Dali painting would accompany this music well. Parts morph into others like a surreal painting does. Not sure if that’s an intentional aspect of this band, or by accident. Nevertheless, it works.

Most of this record is killer psyche-rock with traces of engineering dementia and it makes me wonder what their live experience is like. How does a band pull this off live? Songs like “Anywhere” have extreme sound effects on the vocals and even the guitars and drums are heavily processed. I’m not sure if anyone could replicate this music, it must be significantly different every show.

A notable endeavor on this record is their cover of Guided By Voices’ “Hardcore UFOS”. But as I’d expect it to be totally different from the GBV version, it’s actually spot on and sounds like the original except for the extended trippy intro and outro. It fits into the sequence of songs on the album as one of their own.

And what would close an album like this better than an epic fifteen minute track entitled “Our sentence is up”. It starts off like Black Sabbath, with riffs galore and some cowbell hard rock drumming. After an immense voyage of an album, Black Science wanted to show they can rock heavy and proper, as hard as any stoner band. It blends several movements into a long progressive composition with spoken word samples under an instrumental jam. This is Black Science at their most psychedelic.

To go back to the Flaming Lips comparison, Black Science is the perfect combination of acid-rock and modern indie, much like Wayne Coyne’s vision, but a bit more updated. We shall see if Wayne Coyne’s new record is this good, but I doubt any band of this genre sounds this fresh and mind-altering. I highly recommend this to listeners that embrace the new. My only wish is that more bands had the imagination to conjure up something this thought provoking over killer guitar riffs and bad ass drum beats. I eagerly await a Black Science nation-wide tour so I can experience their music up close and intimate.

The members of Black Science are: