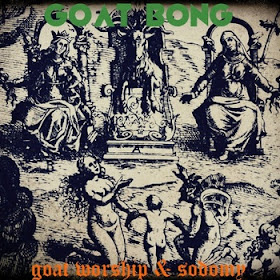 One of the great traits of metal is that the genre and its artists are given plenty of liberty concerning their influences, their direction, and ultimately their output. Every element can lay down a lead-pipe cinch, or the atmosphere can let itself be dominated by a single riff, a torrid bass thread, or the mere presence of Satan's right hand. Albums benefit from the absence of rules, and the ensuing product, despite its middle-finger to contemporary rock radio, will manage to find a fan-base more loyal than a swarm of bees.

As the name would suggest, a cloud of bong smoke won't take anything away from Goat Bong's thick rabbit tobacco.  Loaded with unsettling audio clips slowed to a slur and later pushed to a buzz-saw grind on the hunchback of down-tuned guitars, the band's self-descriptor "Sex, Drugs, and Satan" is probably the fairest and most accurate (and certainly the most pleasantly concise) assessment of Goat Bong's sound. So let's summon the sativa spirit via drone echoes and sludge stomps; roll up the windows, crank Goat Worship & Sodomy, and hit that shit hard.

The five-track album veers in every direction but thoroughly channels the heavy and the high. It's unfair to call it sludge, as the sound truly doesn't resign itself to any specific tag. Without vocals, Goat Bong make strong use of samples (leading with a sweet Poltergeist swipe on Baptized in Bong Water), organs (balanced with the shred on Cannabis Sativa Luciferi), and whatever the fuck else could be found in a dead grandparent's basement. Without any bio, I can only ride the assumption that Goat Bong is all one man, Dirty Mike Alcala. If that's the case, we could be in for one hell of a session once this guy finds an audience.

Where Goat Worship & Sodomy hides its stash is with the drone. While Tripping the Riff is (no gack here) just that, loaded with neck-bending fret-fucking, Romancing the Drone is slowed, haunting, and gorgeous. Packed with hover and dripping with rain, it's easily the album's black-cloud highlight. Punctuated with a few licks, the cavernous uncertainty steals the show and demonstrates the dude's chops. And fuck, man... the sludge/doom denouement at song's end will floor you faster than White Widow, Cheech.

As an ass-fisted bonus, reverbnation holds the key to a haze you won't find on Goat Worship & Sodomy entitled The Lost Art of Bong Rips. Instrumental, repetitive, and shredded, it's equally as toke-worthy as the buds on GW&S. If you can manage to keep your melon from falling too deeply into the cushions, you'll no doubt find this sour diesel's gonna get your head banging.

Obviously, there's no pretense here. Goat Bong is all about weed; evil, riff-drowned weed. It won't take long for these six tracks to make a fan of anyone. They're heavy, they're mind-numbingly fuzzy, and they go great with a lack of motivation. Strap on that jammy pack and punch yourself in the dick, you ain't goin' nowhere. But don't worry... your new friend Goat Bong is coming by. Your mom doesn't trust him, but she's just happy you've found a pal. Like that hesher down the street, Goat Bong's bringin' over his best kush. Pretty soon, though, he's movin' in. And when your grades start to dip, mom's gonna blame Goat Bong.