New Band To Burn One To: GAGGLE OF COCKS 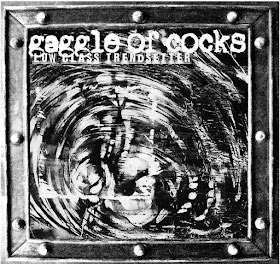 BAND BIO:
NYC's own gaggle of cocks has been makin noise for 10 years now. Though there have been twists and turns, we are back with a new line-up and a new album, Low Class Trendsetter! Recorded at Riverfront Studios in Greenpoint, Brooklyn and produced by Stacy O'Dell & Pat Harrington, the buzz around this release has been electric!

With Charles Ruggiero now providing the massive drum attack and special appearances by Chris Goercke on guitar, we return with a new sound, but the same ole attitude you've come to expect from GOC! This album will set the standard for NYC bands for years to come...


THOUGHTS:
"Sometimes there is absolutely nothing better than just some good 'ole stripped down, rugged and intense rock and roll. New York City's Gaggle of Cocks does just that on their latest album "Low Class Trendsetter". Without getting too wordy with unecessary adjectivity, this band delivers a high-energy and blistering display of potent white trash hard rock. The songs are short but definitely not sweet. With a gravel fed vocal delivery and furious fret board mayhem, you will be bashing your head into the wall with scorchers such as "Black Helicopters" and the bass-driven barrage that is "Guy Supreme". While the band isn't exactly "new" by any means, check out their 2008 release "American Trash" for more highfalutin debauchery."