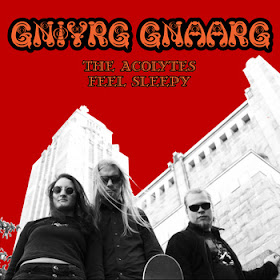 Scandinavia is normally great for power metal, black metal, apocalyptic cathedral throat-chirp metal, and all kinds of other metal that's indulgent, over-the-top, and seeking to balance the pretty with the ugly. With every release, from the great to the awful, I wanna grab bands by the short-and-curlies and quietly, softly ask them to slow the fuck down. Just once. Maybe my American frame just isn't built to withstand all that fog, all that hair, and all the high-pitched nut-cradling.

Helsinki, Finland's Gniyrg Gnaarg, featured as a Heavy Planet "New Band To Burn One To" more than eighteen months ago, have triumphantly returned with a low-slung, first-gear trip through ancient, troubled times. The Acolytes Feel Sleepy is the band's conceptual second release, chronicling what the band calls an "ancient chaos monk who tries to warn his nonchalant acolytes about imminent doom" and a "prophet who has a vision of the depressing future of the world, but manages to see the bright side of it all in the end."

Likely more doom (or "dungeon," as they've claimed in the past) than sludge, Heavy Planet still felt the release deserved a push. The vocals set apart this lo-fi stoner fuzz from the down-tuned deliciousness normally served piping-hot every weekend. Where the slow doom grumble hovers somewhere between hell and its own billowed smoke, the vocals carry these three (well, two... A Wizard? is instrumental) tracks back hundreds of years to a time that not even a medieval history buff can fully grasp. There's something about the way bassist/vocalist Tommy T juxtaposes "A wizard? Nay. A PROPHET!" that drives home a hint of doubt blended with a wall of realization that you won't find anywhere else.

Mangling just under twenty fuzzy clicks won't be tolerated in your cool, damp cell. I can't promise yelling out "Gniyrg Gnaarg" will win over your sweaty bunk-mate, either. But with enough cunning, maybe a rookie dungeon master will look the other way as you spin The Acolytes Feel Sleepy. Or maybe Gniyrg Gnaarg will snap you out of this role-playing bullshit altogether and just get you laid. Regardless, this doomy, hazy sophomore effort is worth your attention. And a few pence.