What is the very best thing about Stoner/Doom/Psychedelic rock, the thing that sets this music apart more than anything else, that makes it worthwhile and meaningful and incredibly joyful to hear and play? It has to be the unanimous recognition by the thunderous hordes of practitioners and their insatiable devotees that guitar is king. Obviously there is no musical style that reveres the guitar more than rock and roll, and I'm a firm believer there is no rock and roll genre, or set of genres, that places the guitar up on the exalted altar of total glory than those espoused on Heavy Planet: Stoner, Doom, Psychedelic, Sludge, Fuzz, High Desert Rock, New Grunge . . . True Rock.

It's no secret that Stoner Rock, Doom Rock, Psychedelica, are all legitimately classified as underground music due to a lack of mainstream recognition, be it through airtime, album sales, or inclusion as theme music on thousands of Hollywood productions, large or small. But that, perhaps, lends itself to the freedom of artists who conjure forth such incredible music week in and week out, year in and year out, until there is so much of it, and so much of it excellent, that it's nearly impossible to discover as much great music as exists. Besides your daily visit to Heavy Planet, where great music is eternally available, there is one other sure place to go for a compendium of some of the finest True Rock available in one place, and that is Small Stone Records, a label that puts forth a tremendous effort to find and sign musicians that create a sound worthwhile as a lifetime go to source. 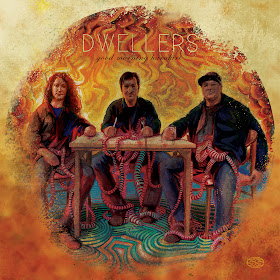 Rare is the band that can create a sound unique enough to call its own without paying heavy homage to some sound of the past, near or distant. Dwellers could very well be such a band. I cannot purport to be any sort of musical historian, so I could never say their music isn't at least somewhat derivative of something somewhere, isn't all music?, but for me the sound this threesome create is incredibly unique, and immensely enjoyable. Each song is relentless in its delivery, melded with inexplicable moxie out of ethereal musings and exhibiting guitar work that soars and churns with dexterous ease, riding a plasma wave of unyielding energy borne of the fiercest joy. Vocals strike an incredibly perfect chord, combining a near perfect rasp to an athletic and capable range, lending themselves to the classification of perfect True Rock vocals.

The abilities of the threesome that make up Dwellers is perhaps the result of prior experiences in previous and alternate bands combined with innate ability and passion that has set the course for all three long ago. Iota member Joey Tuscano takes credit for guitar, vocals, and song writing, bringing his considerable talents to the fray from years of playing in the trenches. Zach Hatsis on drums and Dave Jones on bass, formerly of Subrosa, complete the trio by bringing their own years of trench warfare into the mix. The recipe here has worked often in the past, where talent is forged with experience for several years until karma plays its hand and brings together musicians that seem to experience an epiphany and revelation for significant and noteworthy music that makes its indelible and eternal imprint upon the universal tome of True Rock.

"Old Honey" is a perfect example of the quiet fury of their music as it builds from low intensity to an unyielding guitar encased by the onslaught of the drums beating out a path and a rhythm that always hits its mark in perfect unison with the merciless and malleable bass. It is a psychedelic journey of intrepid emanation and power, laying bare the soul of those who listen just as it had done to those that played, delivered with the wet thump of bloodletting vocals that twist the visceral and primal core held subservient to its almost hypnotic power.

There is a wonderful and slight distortion of the riffs that ride roughshod over "Lightening Ritual", while the drums play a prominent role out front of the tune and the vocals are harmonized for a powerful, primal effect. "Black Bird" carries out more distorted riffage, powerful in delivery, and accompanied by the wide stance of booming bass and backed again by the heavyweight hooks of champion drums.

"Good Morning Harakiri" has been released for several months and perhaps has flown under the radar of too many lovers of True Rock. This is music at its absolute finest and is now compiled in one place that could very well find its way onto several top music lists of 2012. 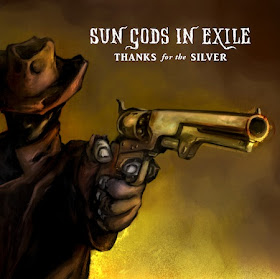 SUN GODS IN EXILE - "Thanks for the Silver"

Sun Gods in Exile play rawk n' roll. It's rowdy, it's loud, it's abrasive, it's relentless, it's tinged with a Southern sound reminiscent of a dozen great bands, from now and down through the decades. It still brings its very own, bourbon inflected sound that you simply cannot sit still for. It moves you, it relates to you, and it pleases you to no end, because this is both fresh and exciting at the same time as the music you grew up with. It is all the great bands past and present you cannot get enough of. The songs are melodic and familiar, and easily sung to. There may not be a more listener friendly set of songs than on "Thanks For the Silver", and we're talking about a sizeable set of songs, with ten incredible tracks that could quite likely burn your place down if you don't pay attention while playing. You will not be able to get enough of "Thanks for the Silver".

There is a strong blues rock component to SGIE's sound, reminiscent a bit of The Black Crowes, among others, with a considerably heavier dosage of guitar riffs ensconced within a huge phalanx of bass, drums, more guitar, and various other fun sounds that create the larger than life sound this furnace blast band emanates with an obvious joy. These guys go all out when they play and it's obvious they have just as much fun playing as you will listening.

"Climb Down" is a prime example of the classic and fresh sound SGIE have created on this album, hitting a reminiscent sound to the aforementioned Black Crowes. "Since I've Been Home" will rock you all the way to point it then pulls on your heart strings in the chorus, reaching down through the tunnels of time to one of those smoke filled, whiskey splashed joints of past times and fuzzy memories. If you want scorching solos check out "Broken Bones" where fire is a likely outcome and Molly may bring out her hatchet for a second or two. "Nobody Knows" is a dance hall summer storm, blowing through at a quick and catchy clip, blowing up skirts in its wake and likely wearing out a hole or two in shoe leather to boot. For sheer beauty it's hard to beat the title track, "Thanks for the Silver".

You can't help but have a good time when you play through "Thanks for the Silver". Sun Gods in Exile are a tightly knit fivesome that know how to deliver music that tugs at the ol' heartstrings while providing the homage to the Guitar Gods we pray to daily.