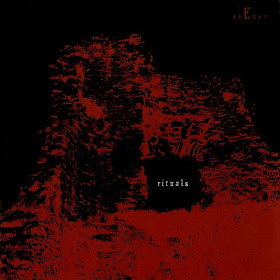 Next time I volunteer for anything, I need to gather more details. Sure, I'll work the beer garden! The assumption is that I'll see familiar faces, get a free t-shirt, and throw back some swiped tall-boys. I didn't know some dickhead would be onstage with a sock in his pants, belting out Tim McGraw parodies. So of course, this morning's Sunday Sludge required some patient, atmospheric doom dusted with female aggression.

Switzerland's shEver aren't new to this. Eight years of the exhausting do-it-yourself approach is longer than most could endure. A little patience pays off, though. And Rituals, their first album on Jerusalem's TOTALRUST label, is a showcase of patient, gradually-constructed sludge/doom hatred. Filled with enough piss and vinegar to wither your black heart, these six tracks enter a trance and bulldoze rhythms until you're delirious with fatigue and giddy with malevolence.

From the onset of Ritual of Chaos, shEver's sound is one of haunting, unsettling grind. Slow guitar plucks challenge the pop and hiss of a nearby campfire until riffs enter and bully the backdrop. The doom slowly flows into your settlement, while whispers and growls create a formidable and captivating vocal tandem. It's a surprising enticement, like the Sirens beckoning Odysseus. Jessica's riffs chop to a steady gear of destructive restraint until this opener concludes with hollowed haunts barbing the muddy terrain.

Delirio is crafted in the vein of the classic sludge-doom crawl, complete with a hollow toilet-gurgle. Rolling and riffing through a tortoise cadence, there's a blood-trail being left behind. The quiet and lilted tempo is brief, giving way to grinding buzz-saw mystery shrouded in a canopy of trees. Nadine's low-end clubs beasts in a remarkably accessible drudge. Subdued but pained, the song draws out the demons. The ascent to crunchy grind burns through ritualistic chants of anguish, steadily snuffing out itself. This is nasty stuff.

Serenity allows for a cool, somber scarring of Sarah's drum taps to begin Je Suis Nee. Sludge drops and stuns the tranquility, swirling into doomed bliss. Slow, patient, and ominous, the repetitive "BONG" is cloaked in wool and utterly hypnotic. Tempos hover and scan the field for prey, while the mirrored vocal is gorgeously disturbing. shEver are just hitting their stride stomp.

The buzz leads right into Souls Colliding, a perfect follow-up to Je Suis Nee. Jessica hits a cool, shallow-wading strum while the band's timing and restraint are brilliantly married. We're slowly lulled into the cobblestone creep that every doom-o-phile falls in love with. Guitars carve through the wall of sound, while the pained growl is symptomatic of the track's awesome patience. A mid-tempo sludge roll emerges, Nadine's bass crashes to the cellar, and the marriage of melodic, drawn-out rhythms and riffs plunge southward. The slow, Persian collapse is one the album's brightest spots.

Persistent and unrelenting is (You Are) The Mirror, a sludgy doom stagger that shaves bone with an organized sustenance. The priestess vocal parallels the plodding rhythm until a tarred and feathered slow-motion sickness has listeners rocking back and forth. Pensive and boiled-down, the highs and lows are fully realized on this grinding shit-pit. The soggy buzz of approaching rain begins the album's closer, That He Na Te. The agonizing pacing and cultish hillside vocals employ an expanding thump with painstaking poise. The emerging back-scratching growls, choppy guitar stutter, and primal drums make for Rituals' fitting final chapter.

That a doom-metal band composed of four Swiss enchantresses can teach listeners a thing or two about taking their time is a marvel in its own right. That they make it sound so paradoxically soothing and evil is an exercise in mastery. There's a mythos doom bands strive for, at times coming off dark to the point of being unapproachable or majestic to the point of being campy. shEver strike a balance carved neatly into their own corner. Their craft didn't rely on trickery or sleight-of-hand. They simply let things simmer a while.