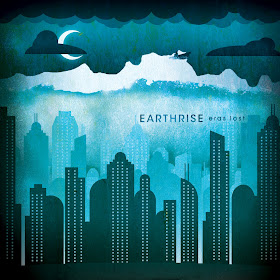 How many of you really think Earth is in trouble come December?  The Mayan calendar is reaching its end, but does that necessarily equate to clutching one another, praying, and confessing our deepest secrets on the eve of what would normally be just another day?  I can't say I buy it.  Four dudes from Minneapolis, however, may make you doubt everything you thought you knew about chaos, Armageddon, and any apocalypse.

Driven by science, technology, and humanity's lack of progress, Earthrise's debut album, Eras Lost, is as damning and (perhaps) prophetic as any scroll or scripture.  The audio settings won't matter; the band provides far more volume than you're capable of handling this morning.  And the post-metal sludge is only half the appeal here. These eleven tracks drag you under fault lines and bludgeon your dogma until you accept the demise of everything you knew.

The fuzzy history-class sample of Challenger Deep buzzes through static to break into a massive doom-drone slug to the temple.  Peppered with faint hope, this solid concrete block of an opener uses agonized vocals and drifting licks to create a beautiful duality.  Mood and atmosphere are somehow detectable amid a crumbling, decrepit landscape of decay.  The grinding sludge is brutal, scraping death from pavement as a cloud of choppy smoke splits bone. Lock your doors.

Mass devastation strikes hard on Titan, rife with nervous, acid-rain ticks and steamroll purrs.  The avalanche of concaved despair burns at your skin and stomps like an angry, drunken giant.  When they assert "the end is fucking nigh," you can't help but cautiously nod.  Former Worlds, however, is far more technical and methodical.  The track sounds like science until sludge-doom crashes and vocals ache for what once was.  The sonic tautology is layered with buzzes, pushes, and third-degree burns.  A break allows for reflection on honor and an otherworldly perspective is twisted through a bass tone of yielded aggression.  Oh, but the chaos is never far; glass shards pelt your skin and a bleak future re-emerges.

The immediate precision of Polar Low shrugs off Mastodon and Baroness comparisons and creeps to a brief crawl before buzz-saw tempo returns.  The track builds, tightens its choke, and let's wrath grab the wheel.  The death knell is merely a realization of the unbearable but unavoidable, carried out on slow Taps.

Relentless marks a turning point on the album, but not for the false hope the bass roll directs.  Sure, it's a bright spot smacked into the album's overt darkness, but the honest vocals and pleasant melodies simply lull us into the fuzzy fadeout and ungodly crunch lean-in to Mirovia, where the thinking man's return to gravity is fully realized.  Plunging to the ocean floor, never allowing for a gasp, listeners are buried under a bed of bones as the planet's constant evolution/devolution is lauded and loathed.

Grinding plod on Eighteen Hundred is perhaps the album's most befitting sludge-tag.  Drums are picked-up and brutalized here, while the message is blatant.  Thick, unyielding, unsettling... Earthrise see themselves as truthsayers, prophets of doom.  "Mass destruction on an apocalyptic scale," they assure us.  Breaking, buzzing, hovering, looming... this calm before the buzz waits for guitars to burn through hope until we're assured: "The sun will not share its light again."

Transmission is an intermission of sorts, but I'll never argue with a doom tie-in that boasts settling ash and slowly descending clouds of chaos.  The technological meltdown is as ominous and unnerving as it is calming and cathartic.  The tandem with Exhale is blanketed darkness in the continued vein of the end times.  The grind and chop creates a chaotic trot via guitar pullback and a wall of congested filth.  The message here, and everywhere on the disc, is a heavy one: "...as the oceans flow upward in protest, with nothing to hold them down."  Well, fuck.  Let's just enter this foggy creep of a misty morning and look at what the night left behind. Your ears are ringing, your skin is burning, and you've already realized that it doesn't matter.

The clean "save us" lyric can't help Frame Dragging from serving as the album's thick, grating aggressor.  Flames surround as we're dragged by the ankles into a pit of insanity.  This murky rumble is beyond fitting as a closer. Your house is gonna shake, while the choppy, intermittent, and unpredictable elements slowly crawl into your pained acceptance.  "Devour me"? Ugh, go ahead!  I don't even know where the fuck I am right now.

Earthrise aren't trying to confuse you, scare you, or justify your warped tenets. But they take no issue with calling bullshit on humanity's failures and bracing for a stern fucking lashing.  The topple won't simply include tangible structure and outlined process, but also the fundamental ethic adopted by society, community, family, and individual that an established operative path is safe from greater swells of power that are limitless and unmerciful. Eras Lost is committed to a broader context, one that allows for acceptance and patience. But somehow we're still licking syrup from the corners of our mouths and hoping Earthrise never succumb to complacency.