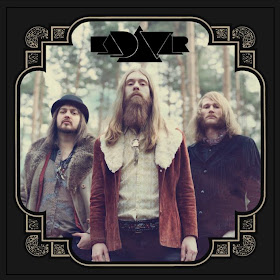 Crisp. Clean. Clear. Words not usually associated with the music of the stoner psych/rock genre where noise and distortion are badges of pride and identity, but I feel compelled to use them nonetheless when describing this latest addition to stoner rock greatness, Kadavar, on their self-titled initial album offering, simply because the music is crystal clear in delivery, whether it be the photon-beam guitar riffs of the album’s exquisite solos, the hard-thumping rock n’ roll engine of the bass guitar, or the pitch perfect punch of the drums. The sound is immaculate, clean as cotton, lending itself perfectly to artistry at its best from this band of Berlin rockers.

Kadavar’s music is descendent from strong rock lineage, with genealogy lines snaking their way through the past four plus decades of the world’s best music, including early pioneers of heavier tones, quality purveyors of grunge and metal, as well as recognized leaders of stoner/psych rock past and present. What these Teutonic trip meisters have accomplished on their debut offering is nothing short of phenomenal. The music is clear and crisp while still delivering truckloads of loud and low that blends perfectly with razor sharp solos that slice right through your brain before you know you’ve been musically assaulted. In addition they’ve managed to deliver music at once familiar in its stylings of psychedelic rock gone over to the dark side of doom and fuzz, but unique in its own very clever and superbly crafted wielding of the weapons of heavy metal. In short, Kadavar know how to make a song, know how to produce a song, and know how to execute a song so that it is effortless for the listener to enjoy the dissection of their minds with slices from Kadavar’s debut.

The members of Kadavar are:

The album opens with “All Our Thoughts”, demonstrating both the crispness of the instrumentation and some signature stoner/fuzz sounds on a scorching intro. When Wolf’s vocals come in it becomes quickly apparent that the music is of the highest quality, something unique and rare. ‘Thoughts’ delivers a steady jam of low, slow fuzz until the point in the procedure where the scalpel-sharp solos of Wolf’s guitar slices through with a clean, clear cut of sonic fury.

“Black Sun” is six minutes of fun, funky riffs overlaying an extended display of measured musical muscle. The refrain is subdued but powerful in its relentless delivery, while the solo guitar work again delivers a powerful slice of electrical discharge as if it had been stored in a flux capacitor of fuzz.

Kadavar continues the trend set on the first two tracks by deliberately delivering a steady dose of stoner brilliance on “Forgotten Past”, which is a long, tenacious exhibition of the threesome’s inspiration in executing their four instruments with inventive dexterity.

The opening riffs on “Goddess of Dawn” are beautiful stoner classic sounds used to encompass a psychedelic tale of magic and mist that in the end delivers on exquisite music in the guitar solos as well as a display of muscular authority from the Rivoli bass.

The pace picks up for “Creature of the Demon” as the Rivoli again gets exercised and again delivers beautiful tone and quality sound. This time Tiger gets to let loose in sections with rapid and agile tattoos that are strident and tribal in delivery. This song moves through a multitude of variation in the structure and delivery of its various parts, creating a wonderful patchwork of brilliant song playing.

The album closes out with “Purple Sage”, whose intro is certainly psychedelic in nature, leading into eight plus minutes of sheer fun and adventure. There’s a lot going on in this one, all of it wonderful to behold, none of it fully gleaned upon first try. It’s an epic way to close out an album with a truly epic track.

Overall this album is a worthy addition to any stoner rock library, demonstrating great skill in concept, in design, and in delivery. Kadavar are quality musicians and gifted artists whose entry into the arena of rock in the corner of stoner/psych music is more than a welcome addition, but a much appreciated shot of pure cosmic adrenaline.