First off, greeting! I am The Klepto, and Reg has asked me to help out from time to time with reviews. Hopefully you'll see me quite a bit on Heavy Planet, and if you want to see more check out my own blog: The Klepto's Guide to Awesome Music (shameless plug). Anyway on to the music. 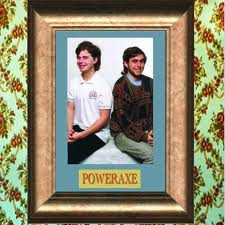 From the bit I was sent about Poweraxe (which you can read at the bottom of the post) they call their type of music 'goom metal.' Now originally I thought it was a typeo for gloom, but it appears not to be. Having not heard any of their music yet (I plan to write as I listen), I don't know what 'goom' is or supposed to be, I'm equally intrigued and off-put by this description. The band is made up of the Brothers Axe (which is an awesome last name) who play a seemingly (from their bio) instrumental doom/experimental sound. It sounds kind of a cool mix. Let us begin.

The first song off of their debut EP, "Getcha God Lovin Outta My Country," smashes you right into the full mix. There is no intro, no build up, it's instant balls-to-the-wall guitar-and-drum thrashy music - which after 45 seconds fades just as quick to a light and fluffy semi-acoustic segment, then directly into a groove. It's an eclectic mix, and while each segment sounds great, they don't really flow together all that well. But it sets an interesting tone for the rest of the album, and I have to hear more.

Their next, "Daddy Needs a Drink," immediately segues from the previous with more of the in-your-face thrash sounds, inter-cut with quarter-note drum and guitar back and forth sections. It is just as frantic as the first song, and just as short (two and a half minutes), and once again flows into a slower groove section (my favorite parts of the two songs), but this time with feedback from a guitar screeching over it all. Even more interesting.

"Critical Headwound" is a little bit more traditional (at least with it's beginning), as it has a semblance of an intro; and while it is a quick song, it's not as frantic as the others. Gotta say, my favorite off the album thus far. it's groove section (surprise) is much more laid back and easier on the ears; before revamping it up back tot he original riff, and then it's over just as quick. Another two-minute song, but the best one yet.
Their fourth, and last two-minute song, "Eagle Arc" is another abrupt beginning, but in a good way. The guitars and drums play a repetitive melody as they climb octave after octave, reaching a pinnacle and bring it all down again with a really catchy rhythm section - capped off with a drum-emphasis break-down. Actually a really cool progression. Again, it's good song, one that tops the previous one. I hope the next is even better.

Their last song, "Frostgiant" is by far their most straight-forward track. There is an intro that leads into a groove section, with expected transitions and melodies that actually flow together. There is the status quo, thrash style, but it is built up to, instead of just suddenly happening. This is also their most psychedelic attempt, fading into a looped guitars and limited drumming section. Not as good as "Critical Headwound," but good for any stoner/psychedelic fans out there.

Oh but wait, whats this? After "Frostgiant" there is over six-minutes of silence which leads.... (drumroll please) to a secret track (cue oo's and ah's). Yes it's true, even in the year 2010 there still are 'secret tracks' popping up on albums. In this case, Poweraxe decides to use this extra time to play their experimental track (compared to the rest of the EP, you're probably surprised I'd call it experimental, but I do); a collection of industrial-themed drum and guitar pieces cut together seemingly randomly with a repetitive bass line in the background. Really not a good song, and not something I'd waste the thirteen minutes (the whole track length) to hear again. A really weak way to end an album.

So that's Slaughter The Animals, Poison The Earth, the debut EP from the self-proposed 'goom' band Poweraxe. If you couldn't piece it together from above, this is not a positive review. It's a group that tries to do new things with old technology - and that is to be commended - but they don't do it well. The only track I would listen to again is "Eagle Arc" with "Frostgiant" being a close second (if not for that secret track), and "Critical Headwound" a distant third. I'm interested in seeing where the band goes from here, but not interested enough to await their next release. Maybe I don't get it, it seems more garage/noise rock then anything else, and that's not for me.

I also have to add one little bit I found humorous; when asked if he thought Poweraxe fit into the underground music scene, drummer Ryan Axe responded, “It does not fit, it never fit, and it won’t ever fit until we eliminate the underground as it is now and build a new one ourselves, which will happen.“ - I laughed at that.

From their own mouth:
About Poweraxe:
Slower, louder, slower, louder.  This is the Poweraxe way.  The self-proclaimed “goom metal” or “instrumetal” band formed in March of 2007 when brothers Brian and Ryan Axe realized they could do more with a two-person group then most people could do in a 4-20 person group.  While they are not the first to only utilize the rhythm instruments in a band, they are the first to do it in such a style that absolutely dwarfs the possibility for improvement via vocals or guitar.  Both brothers having formal training in music allows them to explore a world of tones and timing left unnoticed by the world of aggressive music.  The sound of Poweraxe is not only one of epic volumes and possibly the crunchiest bass tones known to man, but one of a feeling not easily put into words, a feeling that can only be expressed by the deepest metal.  They are also notorious for their live performances that more often than not involve a deep resentment for the audience because, they just don’t understand.  When asked where he felt Poweraxe’s music fit into today’s underground drummer Ryan Axe responded “It does not fit, it never fit, and it won’t ever fit until we eliminate the underground as it is now and build a new one ourselves, which will happen. “