New Band To Burn One To - Dinosaur Eyelids 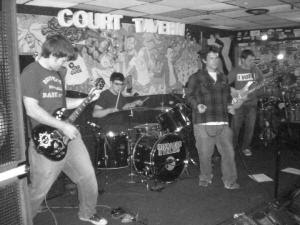 As also seen on The Soda Shop
These next guys here remind me of The Smashing Pumpkins. Let me be clear, it's the funny name and not the music. The band, Dinosaur Eyelids and they're the next New Band To Burn One To. Their sound is unique because they're mostly hard rock and even stoner but they do have hints of alternative. It's not a bad sound or combo, in fact, I think it sets them apart.They currently have one album available called Winter Solstice. They're currently hard at work on a new album which, according to a Myspace status update recently, is almost finished. I look forward to it because these guys from New Jersey have something good going and have a full promising music career ahead of them.