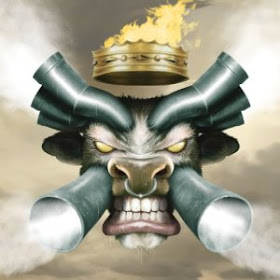 One glance through a few of the recent artists in the “New Band to Burn One To” feature here on Heavy Planet will give you an idea of the amazing variety of musical styles that can be found populating the stoner rock genre. And while I realize that you can trace the roots of this music all the way back to Black Sabbath and beyond, in my mind “Stoner Rock” wasn’t truly defined until the early 90’s. That’s when Kyuss came storming out of the California desert with their fuzzed out, heavy ass riffs and unknowingly started a musical trend that we’re still seeing today.

But lest you think Kyuss were the only originators of the slow and low musical mentality…around that same time, over on the East Coast, a guy named Dave Wyndorf was putting his own psychedelic spin on the stoner movement with his band Monster Magnet. Fed on a steady diet of pills and Hawkwind records, the New Jersey based band unleashed a trinity of now classic space rock albums beginning with Spine of God in 1992, continuing with Superjudge in 1993 and finally Dopes to Infinity in 1995 (rated the number 3 stoner rock album of all time right here on Heavy Planet). In fact, the song “Cyclops Revolution” off the Superjudge album still manages to give me goose bumps to this day. So rest assured, when I was handed an advanced copy of the latest Monster Magnet opus, Mastermind (their 8th overall), to review for Heavy Planet, it wasn’t a task I took on lightly. Let’s get to it…shall we?

The album begins with a down tuned, sludgy, stoner rock anthem appropriately titled “Hallucination Bomb”, wherein Dave plays the role of evil ringleader as he ushers us into his hazy underworld with the trippy opening line “welcome to the grand adventure”. The tune goes on to lay the framework for where Monster Magnet is headed on Mastermind and it is the opening salvo of a very impressive four song stint. The band wastes no time picking up the pace on track two, “Bored with Sorcery”, with its punk rock riffs, blitzkrieg guitar solo and lyrics that seem to allude to Wyndorf’s longstanding residency as a rock n’ roll veteran, a role that has seen him pushed literally to the brink of life and death (Wyndorf overdosed on prescription drugs in 2006). Cynicism towards the “I, I, me, me” state of the world permeates song number three, the groovy “Dig that Hole” with scathing lyrics like “I ain’t gonna try too hard…I’m gonna win a contest and break off my piece of the American dream”. In fact, considering Dave’s battles with addiction, he gets downright introspective in this one when he sings “I’m feeling nervous and my doctor says to me…boy that ain’t nothing that a pill won’t cure”. In case you aren’t noticing the trend, Monster Magnet quite literally puts the “stoner” in stoner rock. So by the time you reach “Gods and Punks”, the finale of that amazing four song stretch and the album’s first single, you may as well take Wyndorf’s advice and “fuck recovery, because you’re already gone”.

Song number five, “The Titan Who Cried like a Baby”, is Monster Magnet’s ethereal take on a ballad, and it brings the album’s thunderous pace to a screeching halt. Don’t get me wrong, this is no ordinary love song…no, when Wyndorf sings about lost love, it’s accompanied by images of black suns, burning palm trees and other righteous shit. This slight break in the action is simply a chance for you the listener to catch your breath prior to the heavy psychedelia of the album’s title track where Dave gargles out more cheeriness, like the line “I know your future’s looking fine…it’s looking rosy as hell”. Speaking of which, this seems like as good a place as any to mention the vocals on Mastermind, which are quite honestly as strong and as powerful as anything Wyndorf laid down on the band’s classic 90’s albums. And the musicianship found here is equally as impressive although the supporting cast has changed over the years. The current lineup, along with Wyndorf, features Ed Mundell and Phil Caivano on guitars, Jim Baglino on bass and Bob Pantella on drums.

Getting back to the music, Monster Magnet starts off the second half of the album with an absolutely blistering track called “100 Million Miles” that takes all the best elements of arena rock, punk and metal, molds them all together and hits you right over the head with it. That arena rock feel and punk rock swagger carry over into “Perish in Fire” where Dave continues to remind us how hard he’s worked in this industry as he screeches “I can think of easier ways of paying my dues…choking on my chicken, singing 21st century blues”…classic! “Time Machine” offers another change in tempo, as it slows things down one final time before the album’s home stretch and features Wyndorf crooning over a steadily building crescendo of dueling guitars. Then, as if to remind everyone that their true bread and butter is in fact stoner rock, Monster Magnet slows things waaaaay down on “When the Planes Fall from the Sky” with a classic doom riff and pounding drums that just lull you into a trance…picture it, your eyes close, your head nods slowly back and forth and an evil grin slowly appears across your face. “Ghost Story” is a song reminiscent of The Cult’s Love album in its beautiful grandiosity, which is due in no small part to the power behind Wyndorf’s vocals. The song is epic in nature and it may just be my favorite of the bunch. The album comes to a close with “All Outta Nothing”, a sort of whimsical, upbeat alt-rock foot stomper that very appropriately sends us away with the line “I’m all outta nothing, with nowhere to go”.

Dave Wyndorf and Monster Magnet have created an impressive slab of rock music with Mastermind, and with a catalogue eight albums deep, that’s no easy feat. As with just about any record, there were a few missteps here, primarily with the slower tracks “The Titan Who Cried like a Baby” and “Time Machine”. However, I’m not missing the point of these songs, which is to break up the album’s pace and transition the listener through its different phases. Whether you’re new to Monster Magnet or you’ve been with them since the early days, check out Mastermind, as it features a little bit of everything that made these guys legends in the first place.