New Band To Burn One To - Mutts 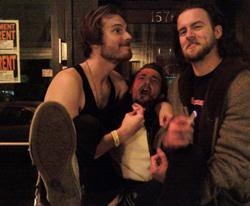 
The next New Band To Burn One To hails form the windy city, Chicago, IL.


Mutts first played together while recording Pretty Pictures EP in July 2009. The session was partially something to do on a week off from touring, and partially a release from record label politics. Drummer Chris Faller had recently left Fueled By Ramen standout The Hush Sound (in which he played bass) after their second album, citing two suffocating studio experiences among his reasons. Bassist Bob Buckstaff’s prior band Wax on Radio also achieved national recognition, before parting ways due to disagreements with Downtown Records over their debut release. And keyboardist Mike Maimone had met Buckstaff in January, when both were hired to play for Wind-Up Records band Company of Thieves. Fresh from his self-released debut recording, Maimone quickly learned that a young band on a big budget label endures scrutiny at every turn.

While on tour in early 2009, Buckstaff pitched the idea of recording a follow-up EP to Maimone’s album by tracking an impromptu session live to tape. They called on mutual friend and engineer Jon Alvin to record the project. He suggested Stereophonic Studio, an old warehouse on the north side of Chicago with a 1960’s 8-track tape machine, and also enlisted Faller on drums. The trio hadn’t played together, and the songs were just ideas Maimone had recorded to his phone on hotel lobby pianos. But with tape rolling, the trio arranged their parts and came up with a 4-track EP, becoming a new band in the process.

Back on the road with their other projects, Mutts play shows whenever they return to Chicago. These have recently included Logan Square Auditorium, Lincoln Hall, multiple Beat Kitchen dates, and Schuba’s coming up on August 30th. They have earned a reputation for chaotic and spontaneous sets, playing the EP songs, covers such as a honky-tonk piano version M.I.A.’s Paper Planes, and revamping cuts from Maimone’s solo album.

In early 2010, a lineup change threw a wrench in plans to record a second EP. But it wasn’t a change in Mutts’ lineup; Company of Thieves replaced Buckstaff with Faller on bass. With his rhythm section suddenly at odds, Maimone invited drummer and friend Cory Healey to play on the session. The trio returned to Stereophonic with Jon Alvin again engineering. This time Maimone left the acoustic piano, playing a vintage Wurlitzer though a Leslie and various tube amps. Again finishing the arrangements as they went, We Float EP was tracked in 3 days and became an immediate and honest reaction to a turbulent time.

We Float EP and Pretty Pictures EP are both available as free downloads on MuttsMusic.com, as well as Bandcamp and other digital sites. Both EPs are also free on CD at shows, and available in the mail via MuttsMusic.com for $5 to cover shipping & handling.

This summer Mutts finished tracking their 3rd release – The Tells of Parallels EP – to be released in October. A vinyl re-issue of all 3 EPs will be available in early 2011.

Head on over to their sites and get your EPs for free. Their official site has MP3 format. Their Bandcamp site has FLAC as well as formats and the ability to buy a physical CD. Enjoy!