After the release of Droids Attack's previous effort Fatal/Error, I didn't think the band could get any better, man was I wrong. This CD has been in heavy rotation on my MP3 player for the last few months. Although the band incorporates some pretty silly lyrics into their music, I could seriously care less. I have always been one that really doesn't care what a band has to say, I just want to fuckin' rock, man and these guys do not hold anything back. If you are in the mood for some serious classic stoner rock riffage with a punkish feel then I strongly urge you to listen to "Must Destroy" 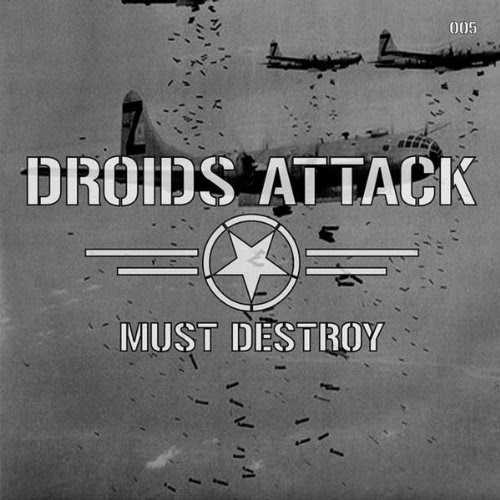 "Because of its lighthearted approach and riffy goodtime vibes it would be easy to gloss over Droids Attack’s third full-length, Must Destroy (Crustacean Records), as a kind of joke release. Song titles like “The Great Wall of ‘Gina,” “Astro Glider,” “The Unforgiven 4,” and “Koko Beware,” while hilarious, support the position. But there’s more to the Madison, Wisconsin trio than goofy lyrics and a robot mascot (although, in many cases, that would probably be enough). They seriously rock.

Guitarist/vocalist Brad Van would seem to be leading the charge, and while one can pick out influences from Melvins to Helmet to High on Fire in his playing, never so specifically as to make the songs redundant. At the same time, they never reach so far beyond the stoner milieu as to be unfamiliar, which winds up adding to the accessibility of Must Destroy. In a way, the party atmosphere is a big part of what helps distinguish Droids Attack, but if one were to experience the album without the artwork, titles or any other context, the music would still stand up. The rhythm section of bassist Nate Bush and drummer Tony Brungraber is a big part of why. Not only do they keep up with Van’s riffing, but they add flavor and personality to the songs. Brungraber’s drums could have stood to be a little higher in the final mix, but even from hearing them as they are, it’s clear the complexity of his playing is an essential element to making these songs work.

The songs are filled out to varying degrees by Tim Thompson’s keyboard work, usually keeping to an organ sound that’s a well-established component of the classic stoner rock feel. I keep hearing Suplecs in “The Arcade Bully,” but that might just be coincidence. The title track which follows immediately is the album centerpiece but not necessarily the highlight. It’s up there, definitely, but it’s hard to discount the later upped aggression of “The Crisis in the City (It’s Increasing)” or the memorable instrumental finale of “Astro Glider,” on which Thompson’s keys come to the fore.

In some ways it feels like by giving it a close reading I’m taking the piss out of Must Destroy, missing the point somehow, and to that end, I’ll keep it (relatively) short. What Droids Attack have on their third album is a successful meshing of solid, thick riff rock with an engaging, friendly mood. I don’t know if I’d vote them for president, but I’d definitely have a beer with these dudes, even if I had to go to cold-ass Wisconsin to do it. In the meantime, drinking by myself and listening to Must Destroy will do just fine. Recommended for anyone not afraid of enjoying themselves." JJ Koczan (StonerRock.com)

"I'm a sucker for big finishes and when I first heard the thrashy, controlled pummeling of "Koko Beware" switch over to "Astro Glider," an extended solo of an instrumental that closes out Must Destroy, I was sold on Droids Attack's latest - and yes, greatest. It wouldn't have mattered if the preceding seven songs were your garden variety, stump dumb riff rockers - "Koko Beware" and "Astro Glider" elevate the album above the cluttered wasteland of "Good for What It Is" and into the more sparsely populated "Damn Near Great."

But hey, those initial seven tracks rock pretty hard as well. If they don't quite hit the same level, they don't miss by much and they certainly set the tone for what's to follow. You could say - and I am - that starting with opener instrumental "The Unforgiven 4," Droids Attack lean into you and never ease up. It may be via bludgeoning (the High on Fire-y and perfectly titled "Great Wall of 'Gina"), it may be filtered through an Only Living Stoner Witness prism ("The Arcade Bully," "Canadian Death Bus"), and it may be downright Sabbathian in its Sabbath-ness (""Must Destroy"), but what it's not is soft or insipid. The riffs are big, the grooves are deep, and most importantly there's always a hook strong enough to hold onto while the band throws down another inspired track.

Those who heard Fatal/Error may think they know what the band's capable of, but it turns out that was just the barest of hints. Must Destroy shows tremendous growth and puts Droids Attack is miles ahead of the curve. The ending makes the album damn near great, but when you add it all up, it's more like "Damn Near Perfect." Highly recommended." John Pegoraro (StonerRock.com)

"You’re not likely to get more bluesy riffs and swagger on any other album this year. Droids Attack have again pushed all the right buttons, when it comes to my love for big, classy riffs and Must Destroy will probably end up on my next, horribly disfigured “year end best of list” as a result of their groovy prowess." - Jay Snider, (HellRide.com)

"Understanding the need for unyielding attitude, these guys are still somewhat intellectual, stepping just beyond the psyche-influenced rock'n'roll that Priestess and Valient Thorr have been mining for some time now. It results in a powerful, churning effort high on creativity and virtually devoid of the genre's typical lazy approach: wringing one substantial riff to death." - Keith Carman, (Exclaim.ca)

"Van keeps things on the good-humored side of macho and lets his obsessions with video games and robots leak in, with song titles like "The Arcade Bully" and "Koko Beware." (Speaking of titles, it's impossible to respond to "The Great Wall Of Gina" without shooting Pabst out your nose, even if you're not drinking one.)" - Scott Gordon, (The Onion)