The Album Of The Day is "Heart On" by Eagles Of Death Metal. 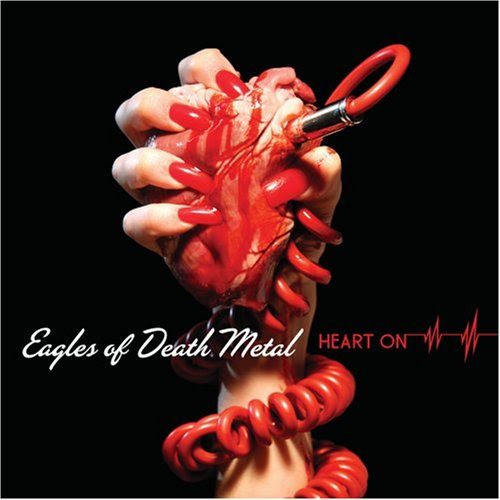 The Eagles of Death Metal take big steps forward with each of their albums, making their scuzz-rock sleeker and catchier without sacrificing its sludgy hedonism: Death by Sexy added seedy glitz and extra sneering to Peace Love Death Metal's gleefully low-rent Rolling Stones worship, and Heart On ups the ante again. Jesse Hughes and Josh Homme boil down their fetishes for boogie rock, disco, glam rock — and above all, strutting riffs — into its most combustible essence while also finding far more shades and moods in it than they have before. Kicking off with "Anything 'Cept the Truth"'s massive swagger, Heart On is top-loaded with addictive rockers. "Secret Plans"'' climbing riff and "I want what I want what I want" are pure id, and "Wannabe in L.A." picks up where Death by Sexy's "I Want You So Hard (Boy's Bad News)" left off, delivering effortlessly catchy late-2000s hedonism (at this point, "I'm burnin' gas until I feel all right" sounds way more decadent than sex or drugs). "(I Used to Couldn't Dance) Tight Pants" and "High Voltage" are the Eagles of Death Metal at their most louche and kinetic, soundtracking a long night out with grinding riffs and low-slung basslines.

That string of songs sums up the band's slavish, sometimes exhausting dedication to the rock ethos so well that it's almost a relief when "Now I'm a Fool," Eagles of Death Metal's first honest-to-goodness ballad, ushers in Heart On's darker second half. Whether it's about breaking up with a woman, Los Angeles, or both, "Now I'm a Fool" is one of the album's best songs, its drifting introspection and smooth contours making it stand out all the more among the rest of Heart On's hard edges. From there, the album brings back the rock but remains just confessional enough to reveal a few chinks in the band's armor as they dig into loves, friendships, and nights out gone bad. Hughes wonders "what good's a heart if it's not on your sleeve" on the Stones disco-gone-Devo of the title track, while "Cheap Thrills"' guitar squalls stretch the scope of the song's world-weary emptiness. Even the songs with cartoonish titles don't play out exactly as expected — "Solo Flights" sings the praises of masturbation, but with lines like "no one gets to love me," it's not all jokes, and while the final track "I'm Your Torpedo" is a proudly obvious mating call, its hypnotic groove is also surprisingly serious. Fans of the goofy rock send-ups Hughes and Homme did on Peace Love Death Metal and Death by Sexy might think the pair are taking themselves too seriously here, but they add just enough maturity to the mix to make Heart On a consistently great album. (Heather Phares, All Music Guide)