New Band To Burn One To-Pegataur

Pegataur is a power duo that plays heavy rock influenced by metal, doom, and punk. Add to this a theoretical foundation that draws from the world's great esoteric traditions and suddenly a new vision of the universe emerges which Pegataur calls simply: Musick.

Pegataur was formed in 2007 by Aaron Levin (drums) and Eric Murray (guitar) in Oakland, CA. They had previously honed their horned hands in bands such as Stay Gold Pony Boy and legendary cockrockers Boyjazz (Frenetic Records). After an impromptu voyage which resulted in the song "Divine Young Horse" (track 9 on Eternal Flight) it became clear that much more was at stake. Aaron & Eric proceeded to harness the elementals through their chosen musickal
weapons to great effect.

The results are the 11 tracks found on their debut album Eternal Flight which will be released by For Once Records on November 4, 2008.

Though the jams were indeed righteous, Pegataur embarked on a deeper journey to understand their spontaneous creations. Thus began the development of "The Pegataur Working", a custom designed software package created by Eric that analyzes the musical structure of each song in an effort to correlate it with the wisdom of the many esoteric doctrines in which Pegataur is initiated. The initial fruits of this research are the song titles as well as the corresponding sigils depicted on the cover of Eternal Flight. Pegataur vows to continue their researches in an effort to better understand their music and the universe from which it sprang.

Today Pegataur is working on new material while blowing away audiences with their live show. Their intense performances involve a battery of guitar amps, each with a unique effects chain, as well as the famous "golden cannon" drum set which leaves audiences wondering how the hell 2 people can make so much noise. 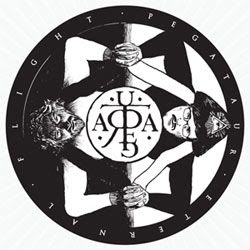 On Eternal Flight Pegataur forges classic metal, doom, and noiserock into an irresistible alloy of hard rock mayhem. Each track showcases the beast at its best whether wallowing in the sludgy depths of stoner rock excess, galloping with thrash like intensity, or flying high again on the wings of pyrotechnic guitar work harkening back to the golden age of heavy metal. Though clearly rooted in the tradition of heavy music, Eternal Flight rewards those who can hang on with a surprisingly sweet pop center. Even in the depths of rocking the fuck out, Pegataur still pour enough sugar on their hooks to convert the non-believers.

Of nearly equal importance is the hand illustrated cover art which forms a complete microcosm of the Eternal Flight universe. Orbiting around the Pegataur seal are 11 sigils for the tracks and a 12th king sigil to bind and rule the album as a whole. Utilizing techniques employed by such famed Renaissance occultists as Heinrich Cornelius Agrippa von Nettesheim and Dr. John Dee, each song title and corresponding sigil were generated by custom software (written by guitarist Eric Murray) that correlates the musical structure of each track with the many esoteric traditions in which Pegataur is initiated. It is suggested that the neophyte concentrate on each sigil as the song plays while holding the song title firmly in their mind to further their studies.