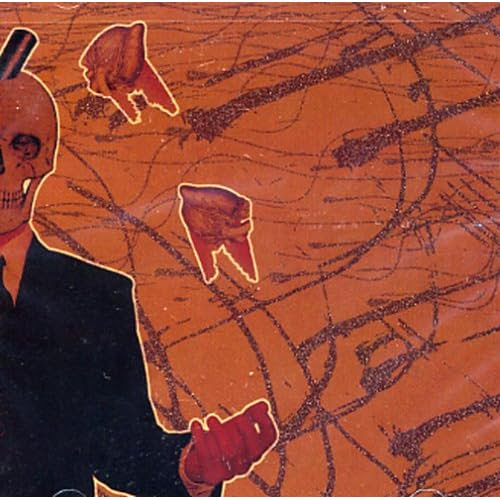 Straight off the streets of Montgomery, Alabama, El Chupa Cobras bring us a platter of spastic, angry, Today Is The Day-styled insanity, equal parts amped-up noise, punk fury, prog-rock noodling, and metallic aggression. If only The Jesus Lizard made some money for every noisy metal band they’ve inspired in the last few decades.

The biggest downfall with many bands of this ilk is that the constantly churning nature of the music gets in the way of the enjoyment of the record, that there’s no foothold to grab onto in the avalanche of ideas. Only the smallest of steps separates the adrenaline rush of a constant barrage of unexpected twists and turns and the ear-bending confusion of the same. El Chupa Cobras are literally standing on that line. I say so because, while this is playing, I dig it a lot—I’m sucked into the sturm und drang—but still, after about ten plus listens, only a few points remain in my skull for the long haul, bouncing around the catacombs of useless information that passes for my brain. On the “doin’ it right” front, the parts that I do remember are the riffs, of which there are many—the atonal descending opening of “Rehab,” the bass-driven chug of “Pre-Op,” the elongated outro “Chocolate Mask.”

Vocalist Kenny Johnson has a harsh, hardcore bark, distorted slightly, a bit lower in the mix than most everything else, and constantly reminiscent of someone, but I can’t think of who that may be… (Feel free to chime in and help me out in the lashes below…) His dynamics never vary, not once throughout the record—it’s the same vocal tone. If you’re not a fan of noise-rock, then I’d wager that you’re not going to dig these vocals, but that’s cool. Me? Well, I am a fan, and I do dig ‘em, but in truth, for the most part, he’s not the focal point anyway. After a bit, I tuned him out and just dug into the chaos beneath him.

El Chupa Cobras starts hard, with the crashing guitars of “Girls At Club Seven,” and it never stops or stops changing until “Chocolate Mask,” the album’s longest moment at seven minutes, over twice the length of any other track. This whole record is over before you know it, and that’s probably for the best, not because it’s bad, but the whole get-in-and-kick-them-before-they-know-what-hit-them approach works. Nothing here is absolutely overwhelmingly original, but like a great punk record, it’s just a blast of fun and you move on, happy that you shared that moment and searching for the next one.

In short order, I’ve landed this record, the debut by Cobras' labelmates The Devil And The Sea, and the reissue of Today Is The Day’s debut Supernova, so I’ll concede two things: 1), that this band has been trumped by both The Devil And The Sea’s sludge-doom and TITD’s mastery, and 2) that the TITD comparison above may partly be because that band is fresh on my mind. (Or it could be because El Chupa Cobras sound quite a bit like them, although perhaps less experimental.) Either way, if you like Jesus Lizard / Steve Austin, and/or if you can handle calamitous ADD-addled song structures, then this is a great little burst of distorted and disjointed chaos, punky and metallic and ugly, fleeting but fun nonetheless. (Jeremy Witt, MetalReview.com)