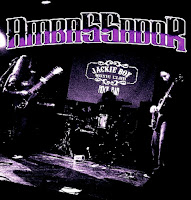 "As soon as track one "Astado Natural" starts to play an instant haze of smoke fills the room. My immediate thought from the first note was Blue Cheer, but as the song continued on things became fuzzier and fuzzier. The band doesn't wander very far from the heavy, and I mean heavy blues, although the sinister riff on "El Siniestro" hits some pretty evil doom territory. The band hails from Argentina, so the lyrics are primarily barked in the band's native language, regardless of the language barrier the band tears it up track after track on this damn fine demo. Take a Hit and pass this along!