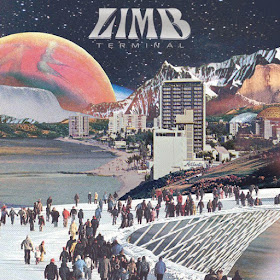 If you're not into bands that leave you feeling like you've been elbowed in the face with a barrage of heavy riffage, then look away now... Coz that's Limb's special move and they'll get you every time, over and over again.

Born and bred in London, Limb are like the bastard son of Clutch and Electric Wizard with a cockney swagger through a Louisiana swamp, which when combined makes their sound their own. It’s hard to pin down the four-piece as purely purveyors of sludge, as there's more going on with their latest long-player 'Terminal'. And it's goooood.

An almost perfect concoction of groove-infused heavy sludge rock, 'Terminal’ sounds like a big step forward in the band’s evolution, and evidence they have picked up a few tricks from previous tour buddies Black Moth. Also evident is the influence of producer Russ Russell, known for his extreme metal work with Napalm Death, Dimmu Borgir, Evile etc. Through Russell’s knob-tinkering and ear for production, you get a real sense of how BIG the band would sound live... and Limb have never sounded better.

There’s very little respite to the pounding maelstrom of riffs and guttural growls of vocalist Rob Hoey throughout the record - the perfect soundtrack to sinking a beer or ten, cranking up the stereo to ear-splitting volume, and throwing a house party till the police show up. Stand-out tracks here include ‘Dawn Raiders’ a straight-up shot of pure stoner groove with a menacing bluesy bass riff, ‘Micromegas’ a fist-pumping anthemic stomp, and ‘Cocytus’ which concludes the record with an 9 min epic 3-part track of hypnotic and relentless rhythms.

It’s obvious Limb take their craft seriously, evident with both the lyrics and awesome artwork by Cur3es (you may be familiar with his art on Fu Manchu’s ‘Gigantoid’), portraying a dystopian near-future and the response of humanity. Worthy of owning the limited vinyl version on its own.

With ‘Terminal’, Limb have upped their game, defined their sound and delivered some cracking tracks in the process. With any luck they’ll continue to do so, though you get the feeling these guys make their own luck.