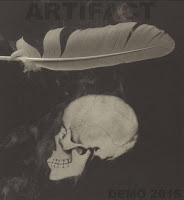 Artifact is a four-piece band from Portland, Oregon. The band has just released their 3-song demo and it totally caught my ear, mainly because it sounds like something from days gone by. In these three songs, the band has managed to incorporate elements of seventies prog-metal with early eighties NWOBHM. Three glorious little nuggets of melodic retro-metal. Other than the vocal being a little too forward in the mix, the band has managed to capture that truly vintage sound. You won't find too much information on this band other than Bandcamp and here, but they are worth checking out. Especially the track "Winds of Doom" which I have provided below. Very nice demo fellas!