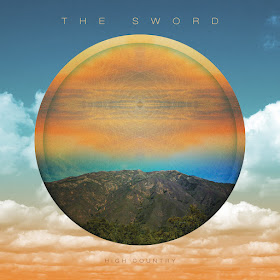 Almost a decade since their revered debut ‘Age Of Winters’ (2006), The Sword return with their fifth record ‘High Country’. And if you’re like me and have followed the band’s sonic evolution over the years, their latest offering feels less like progression and more like full-blown reinvention. Throughout their career, The Sword have fed their brand of stoner rock to the masses, acting like a gateway to any number of stoner acts covered on this very site. But forget whatever preconceptions you have about this band. It doesn’t apply here. This is The Sword boldly stepping out from the shadows of their former selves.

Still ever-present are vocalist’s John Cronise signature melodies and mythological lyrics, but instead of being low in the mix as on previous records, here they shine through with confidence. With ‘Empty Temples’ Cronise is reminiscent of Thin Lizzy’s Phil Lynott, and there are more harmonies on show throughout the record than ever before, giving ‘High Country’ a genuine classic rock feel. Halfway in, the band's experimental horizons impress with synthesizers on the spaced-out interludes of ‘Agartha’, and ’Seriously Mysterious’. Perhaps the biggest departure from previous material are the guitar sounds... Cleaner and brighter, they’ve also moved up from drop C delivering a more vintage sound, akin to fellow Texan's ZZ Top.

Highlights include the slinky meandering southern groove of ‘Mist & Shadows’ (probably the track most similar to their back catalogue), foot-tapper and album opener ‘Empty Temples’ and the thrashy headbanger ’Suffer No Fools’.

With ‘High Country’ The Sword have embraced their classic rock influences with both hands, and shed their stoner-doom skin almost entirely. Whilst the more narrow-minded of fans may need a few spins to get onboard with ‘High Country’, The Sword effortlessly remind us of the roots of heavy music and we thank them for it.

Have a listen to ‘High Country’ below and let me know what you think...