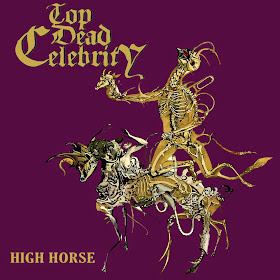 The latest record from Salt Lake City’s Top Dead Celebrity is a ferocious beast, spewing out screeched hardcore vocals over a landscape of stoner/bluesy/punk songs, each one as effortlessly catchy as the last.

Opening with the bluesy riffs of ‘Ghost’, it’s not long before the guys kick start their assault on the senses with their own brand of rock, grabbing your head an shaking it until breaking point as the track continues to grow through levels of stoner, punk, with hints of a pop sensibility to boot. Top Dead Celebrity are a band to keep you guessing as to their next move, and they generally tend to creap up on you from behind with a blunt knife. A track such as ‘Runaway’ perfectly sums this aesthetic up by blending an aggressive six-minute song through practically every genre of music you’d care to endeavour without losing its identity as a rock song.

The rest of the record follows through similar channels of snarled aggression and catchy hooks, before the band throw a curveball with the spookily whispered ‘Pull The Knife’ carrying a Mark Lanegan Band style of musicianship, which proves a needed rest bite before the fuzzed guitar riffs of ‘The Closing’ throw the bricks back in your face, and the assault continues.

It’s going to be hard pushed to find a record with as many memorable hooks and choruses as this all year, and putting that alongside its brutality, the album is a benchmark to beat. With High Horse, these Utahans have ultimately created a great rock and roll record. 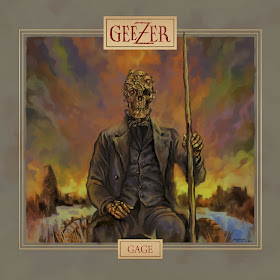 You know when a sound hits you, and it entwines itself around your very essence, matching its shape and flow with the contours of your body, a bluesy smoke-filled, whiskey flowing, primal sound which pauses your day for its duration? Geezer have created such a sound on their latest EP Gage, and it has the power to leave us transfixed, trembling in front of the speaker.

As the opening psychedelic blues riffs of ‘Ancient Song’ gently sway into your consciousness, you’re already drifting away on a smoke cloud of heavy blues jams, at peace, until frontman Pat Harrington’s vocals tear through you like a rusty cut-throat knife, wielding a sound of ancient wisdom and damning context. The musicianship of all the band is an impressive collective, soaked deeply in a Memphis vibe that can’t be faked.

You’d be forgiven for thinking that Gage was simply a gentle blues record as ‘Thorny’ delicately tickles your ears, but Geezer are a heavy blues band, and they bring the HEAVY when the phenomenal ‘Ghost Rider Solar Plexus’ kicks in with destructive fuzzy guitar riffs to melt the coldest of faces, blasting you through six-and-a-half minutes of sonic blues brutality.

The epitomised track on this EP, ‘Tales of Murder and Unkindness’, is a lengthy example of the range of musicianship that Geezer has to offer, steeped largely in a 1960/70’s hard psychedelic rock phase, with underlying blues riffs, and added stoner jams. Gage is a record which is heavy, not necessarily heavy in the sense of loud angry noises, but in its truest sense; deep layers of passion, soul, and grooves to make your soul shiver. 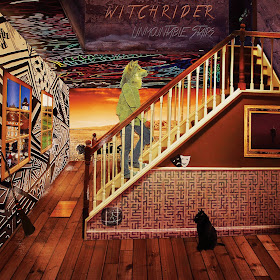 With softly sung vocals masking over the top of driving stoner rock, it’s no real wonder that these Austrians are compared to QOTSA at almost every opportunity, and with the sound and promise that the later band had originally sparked, it’s as much of a compliment that Witchrider deserve.

Having signed with Fuzzorama earlier in 2014, their debut full-length Unmountable Stairs is greeted with much anticipation, of which the band carries with ease from the start. The band play a brand of fuzzy alt-rock that fits in with the hardcore troupe, as well as the poppier sensibilities of the genre. ‘OCD’ kicks things off with driving lo-fi riffs that yell out teenage angst, showing that these newcomers have something to say amongst their contemporaries. No matter how “pop” the sound becomes, theres always an underlying stoner riff and guitar lick waiting to burst out and remind you of just what the band truly have to offer (just listen to the climax of ‘Black’ for evidence).

Witchrider show that with fuzz music, you don’t necessarily have to be the loudest, or the most cut-throat, to excel: ‘SB’ is a soft grungy song that carries pounding drums throughout without needing to yell at you to grab your attention, while the title track is a space rock track Monster Magnet would stick on repeat. The Austrians can glide easily through many different genres with ease, making the record an exciting listen as there are no safety zones to fall into.

What Witchrider carry with them, forgetting all of their tags of alt-rock or mentions of pop and QOTSA, is potential. With their knack for being great songwriters, their preference for things on the stoner/fuzz side of the scale means that the band have the ability to take themselves onto truly great things. It all started with Unmountable Stairs.