LP Review: The Midnight Ghost Train - "Cold Was The Ground" 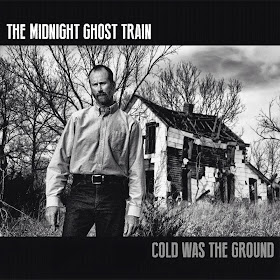 August 1st, 2013 marked a turning point in how I approach expectation. A year prior, I had declared The Midnight Ghost Train's Buffalo to be the greatest thing since burnt cheese. I'd met and gotten to know the band, shifting between roles of writer and fan, filled with warmth from the belief that I didn't have to listen to anything else; I'd heard the gospel. Frontman Steve Moss had promised new material would see some light this evening, but my only hope was to hear Buffalo played straight-through, fattened up with extended, jammy passages.

"And I will be true to my love... if my love will be true to me," a bellow from the stage announced. What immediately followed flattened the crowd and damn-near toppled Reggie's Music Joint under the weight of itself, shaken to its brick foundation. I hadn't heard this. I hadn't heard anything like it, in fact. The Canfield offered more than The Midnight Ghost Train's heaviest brand of its own trademark. It offered an introduction to Mike Boyne, the band's new bassist. It offered more focused, proficient musicianship than the band had ever delivered. And it offered a finger wag, suggesting I should never believe this band has any intention of resting on its accolades.

The Canfield, as a song, stands as the midpoint of Cold Was The Ground, The Midnight Ghost Train's gritty, aggressive studio follow-up to Buffalo. But this album is hardly a collection of songs. In fact, it's less an album than a vengeful campaign draped in fuzz and strewn with vigorous bass threads, serpentine guitar routes, and the skin thumpings of a Navajo. The album puts its predecessor in an abrupt, dusty cloud via augmented songwriting and musicianship. Thick with coiled tension and peppered with jarring bursts of release, Cold Was The Ground is just the latest stop on this band's weathered, hand-wrought pilgrimage toward greatness.

The steady, hovering fuzz of Along The Chasm clashes with greasy bayou subversion, introducing the relentless Gladstone. Sticky, tasty, unforgiving... take your pick. Tempos shift nearly as much as blame, harnessing and later releasing an energy that absolutely cannot be contained. And when BC Trucker cakes sod and threads through a wheat field, it evolves into the band's best advertisement of newfound chemistry. The riffs are too hot to chew on and the dust hasn't a moment to settle.

The album's continuity is incredible, easing between tracks that could number anywhere from one to eleven. Arvonia breathes a spacey springboard before knocking down walls and punching through the ceiling. The buzz of southern payback spins the tale of an everyman simply pushed too far, unfurling toward One Last Shelter's collapse into a faded, soiled recliner. But of course, we're jolted from our stupor after guitars stutter, ever the deceptive element from a band bringing surprises seemingly out of nowhere.

An all-out stoner fuzz fest hardly defines all that is Straight To The North, a downshift slowing toward a gaping-mouth stop. The pauses amid the stop/start dynamics effectively and repeatedly captivate us, building trepidation and dancing among the thick, lurid embrace of interwoven drums and bass. Licks are driven like nails into knotted trees, but the album's rock triumph has yet to reach any pinnacle.  The quick, unhinged No. 227 gets lost in blind consequence and lyrics take a step forward beneath the torrid clip of calculated disregard. A familiar riff returns full-circle, as if to suggest we can't simply speed away to escape unpleasant truths.

A sobering reflection on The Little Sparrow is harrowing for as gently as it's delivered. The pensive poetry chronicles submission to what the road has inflicted. What was once promising and cathartic has nearly squashed one man's previously undaunted spirit. Luckily, the band has reserved its finest return to monstrous, matted stoner-blues for the closing tandem of Twin Souls and Mantis. The former's steady push toward fate can't mask the brilliance of Moss's distant guitar, which is here as superb as it's ever been. Death-rattle assertions funnel into a flurry of fuzz, broken by an unmatched solo. Mantis threads and uncorks, pointing fingers to expose the imps. Timbers swing, promising the ultimate collapse as licks blast in every direction. Stomping into a stagger, staggering into swirls, this coup has exorcised all demons.

Cold Was The Ground finds America's greatest live band again pushing their studio sound to its furthest and its fastest. There's nothing left on the table but stains from sweat's salt and brothers' blood. The Midnight Ghost Train rip out their heart and steam through any expectation of a letdown by honing their chops without smoothing the edges. Blisters, back pain, scar tissue... You can hear all of those. What you won't hear is anyone denying this is one of 2015's best releases.