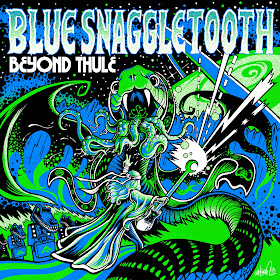 You remember that kid in school who never quite fit? He wasn't necessarily weird, he didn't lack friends, and he was almost off-puttingly cool. He spoke like a transplant from another time, but you couldn't tell if his dialect was from the past or the future. He had a presence that you couldn't quite explain and his confidence bled through clothes you wouldn't find at the mall. And when the bell offered the day's first taste of freedom, you knew he was gonna be truer to himself than you were.

Whoa, who's this? Blue Snaggletooth's retooled lineup is that swayed aura from an alternate dimension, thrust through our speakers on Beyond Thule, a nine-track sophomore push that's meatier, more cosmic, and more honed than the band's 2011 debut, Dimension Thule. That's hardly aimed at diminishing what that lineup secured in their thrown-back, precocious and delicious fuzz tuber. Instead, our intent here this morning is highlighting an act that remains true to the ethereal fuzz, its pioneering forebearers, and expanding on an already dynamic presence.

Blue Snaggletooth make no haste in immediately showcasing their classic stoner backslide via dripping, sky-shot licks on Reptiles. Elements are driven to their groovy peaks and the band's foot never leaves the gas, firmly announcing these guys are not of this era. Sleeping Mountain is a slow juxtaposition, illustrating ever-evolving scope riding on pensive psychedelia seeking deeper, distant truths. Thick, lumbering riffs sway toward a torrid groove, spiraling upward in what is, for now, the album's finest moment. If nothing else, these guys can craft a fucking escape.

Stops and starts are prevalent throughout the disc's midsection, and tempos range from itchy jumping bean clips to dirty signature shifts, breaking every rule and coming out ahead as a result. Moods deviate nearly as much as gears, and shaking off the caked mud is every bit as important as returning to oozy tones. Gawkers drops back in its seat and fills us with a blend of wonder and dread just before we're jolted from our creature comforts and thrust into bristled hedges. And later, Nameless Cults is executed with such confidence and precision that we're nearly lost under the sludge-stained stoner stomp. It's as sticky as these guys get, but that guitar just can't help but gush.

If Beyond Thule offers a signature track, stamp Ahamkara as the album's comprehensive crowning achievement. Steady lopes and an evaporation of all that viscous warble hardly encapsulates all you'll hear on this track. The thorax is highlighted by a lonesome drone, peppered with plucks that promise nothing but further spacey unknowns. It's celestial and boundless, breathing and swelling and ultimately spilling over, into and onto damn-near everything. The familiar channels return for a roll in the hay, but Blue Snaggletooth's most genuine flash comes when they conclude "transcend out of all time." Right on.

Whether tightening only to later explode or tripping out as the sound unravels, Beyond Thule is an album offering nothing you can't love. Get lost with this. Bouncing between trees but never fully coming to a stop, Blue Snaggletooth chop and warp their way into your mind and expand your world. Your dad might like this as much as you do. Come to think of it, maybe your grandkids'll be into it. This sound is vast, timeless, and soaked in transcendence. Dig it. 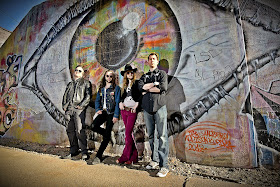