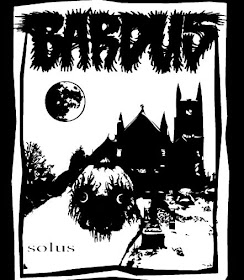 Sandwiching several days' activities into one weekend bakes an atmosphere of little sleep, high tension, and snarls at those closest to you. Add a patch of ice under worn soles and you're surprised a trip to IKEA could get any fucking worse. Why does cabin fever lead to thoughts of redecorating, upgrading, enhancing, storing, displaying, constructing, and ultimately throwing tools? I woke up this morning scanning a backlog of submissions for some soothing, droning, cathartic, ambient post-metal pretentiousness that wouldn't be offended if I nodded off. Well, too bad. I stumbled on Bardus.

This Philadelphian trio formed in 2011 and released their first full-length in 2013. So I guess it's not new, I guess maybe you've already discovered them. And I can guess that if you haven't heard Solus, it's fair to consider you won't leave it behind after one spin. On the album's eight quick-spat tracks, I can't determine whether not a moment is wasted or if EVERY moment is wasted. Regardless, Bardus don't care if you've never been in a fight. This relentless push of sludgy noise wouldn't let me off the floor.

Tiny Teeth's hot-buttered drums and loose plunks blast fuzz through speakers and immediately rip at our skin. The sweaty, expanding thickness perfectly underlies murky stomps on this loud opener that announces the band doesn't really give a fuck. The grazing Death Letter follows with potent, violent churn, constantly shifting and leaving not a moment to catch up on breaths. As these tracks play out, the sound absolutely saturates, blanketing with shrapnel and subsequently glazing with jagged guitars. As Hex unfurls, we struggle to outrun the band's flick of a rusty knife headcharging for our heels.

The cosmic, shit-soaked cruise of Maladroid grows into phantom scratches, shoving us toward something bigger, higher, and far more sinister. No frills needed. Bloodbrain's fuzz beating interrupts the onset's moment of clarity, a far-off swarm of locusts in the closing distance. The track's warbled, indiscriminate violence is strewn all over, and you're yanked back to your burlap sack nightmare, puss.

Sludge is most evident on Dave Groan, an exposed and grimy buzz-flutter steadily cruising under exhausting, crushing drums. Guitars levitate, but the malevolent stare just won't shake. As the track chops and trails off, a deceptive haze develops and briefly lets us get lost. Eh, don't buy it. Jobber is dark and unsettled, lined with questionable purpose. A jittery, captivating rise ensues and blisters have time to form. And then, well... we're immediately flushed back into blue flames before High Tide's stoner repetition brakes toward a cool burn, bouncing with a frightening fucking smile. The fadeout, though, is perhaps more stupefying than the beating we've endured.

Call today's feature a stream-of-consciousness account of a sound I struggled to keep pace with. The impossible task of documenting everything I heard grew tiresome, leaving me no choice but to summarize with colorful, illustrative descriptors that do Solus no justice. You'll wanna scratch your head trying to describe the sound, but you'll also have trouble lifting your arm near album's end. Bardus knit hot chaos within quick tempos, only to thrust that crochet needle just under your sternum. Sludge? Noise? Ugh... Hardcore? Nah. This is just genre-defying impetuosity. And you're the fucking tomato can.